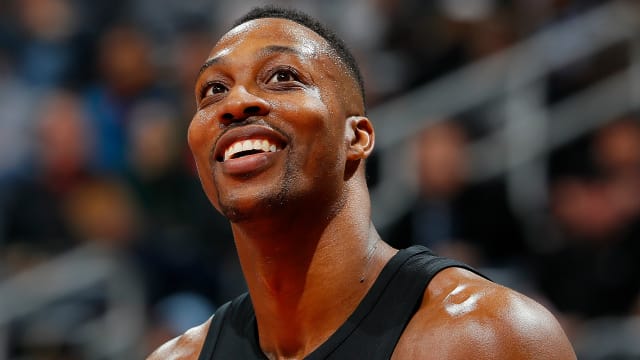 Howard played just nine games for the Washington Wizards last season because of a back injury that required surgery before he was sent to the Memphis Grizzlies.

The Grizzlies are likely to waive Howard – an eight-time All-Star – if they cannot find a reasonable trade for the 33-year-old center.

If Howard becomes a free agent this offseason and gets to choose where he plays next, he would consider a return to Los Angeles, where he represented the Lakers in 2012-13.

"I don't know what's going to happen, but I do love L.A.," Howard told the Los Angeles Times. "Staples Center is going to be rocking this season. When I played there it was rocking every night.

"The atmosphere is crazy, not just for the Lakers but the Clippers too. I just think all the hard work they've put in is paying off now. They've always been viewed as the Lakers' little brother, but they decided to stand out and be different and you have to thank guys like Blake Griffin, DeAndre Jordan and Chris Paul for laying the foundation for this team, and then what Doc [Rivers] has done has been great. This is just all that hard work paying off."

Howard played for the Lakers for one season in 2012-13, hoping to form a super team with aging stars Steve Nash and Kobe Bryant. That roster was underwhelming, though, finishing seventh in the Western Conference. They were swept by the San Antonio Spurs in the first round of the playoffs and Los Angeles have not made the postseason since.

After parting ways with the Lakers, Howard played for the Houston Rockets, Atlanta Hawks, Charlotte Hornets and Wizards. And the league has changed a lot since he last lived in Los Angeles.

The Lakers signed LeBron James in free agency last offseason and pulled off a blockbuster deal to acquire Anthony Davis from the New Orleans Pelicans this month. They also brought in Danny Green, DeMarcus Cousins and some highly-regarded role players.

Although the Lakers did not make the playoffs last season, their new personnel make them one of the favourites to win the championship in 2019-20.

Then there is the Clippers, who signed 2019 NBA Finals MVP Kawhi Leonard and managed to convince the Oklahoma City Thunder to trade Paul George – spring boarding them into the championship conversation.

Howard still thinks highly of the Lakers, despite his short stint with the team.

"It just wasn't the right fit for me at the time," Howard said of his first season in Los Angeles. "But the Lakers have been doing something right for a long time because they have the most fans in the world and the most championships over the past 40 years. You're not going to win a championship every year, but they're back and will compete for a championship next season."