Crazy sixes and Super Over drama: How the Cricket World Cup final was won 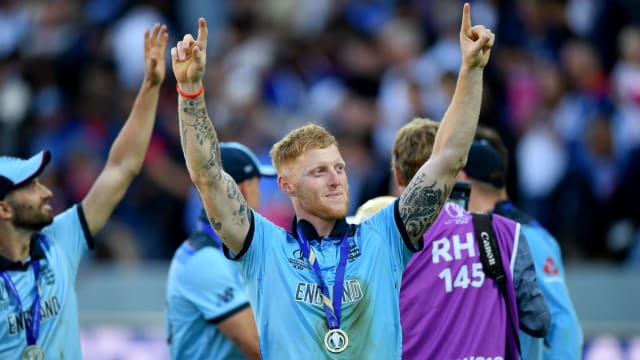 The closing stages of England's remarkable Cricket World Cup final victory over New Zealand provided drama by the bucketload, with the hosts eventually prevailing following a Super Over at Lord's.

After New Zealand had posted 241-8, the final overs of England's chase could hardly have been more thrilling, and it turned out that was just the start.

We look back on how the drama unfolded as an astonishing final was won by the narrowest of margins, England prevailing due to the fact they scored more boundaries than the Black Caps.

Ben Stokes underpinned England's pursuit of 242, but the hosts were in big trouble after Jos Buttler's dismissal for 59 ended a fifth-wicket stand of 110.

When Liam Plunkett holed out to long-off in the 49th over, England needed 22 runs off nine deliveries.

Stokes then picked out Trent Boult on the long-on boundary from Jimmy Neesham's next ball, but the fielder could not avoid stepping over the rope while he still had the ball in his hands, meaning a crucial six runs were added to the home total.

IF YOU THOUGHT THAT SIX WAS UNUSUAL

A target of 15 from the final over became much tougher when Stokes failed to score from successive Boult deliveries.

England's key man thumped a maximum over midwicket to keep the chase alive, but no one could have possibly imagined what was to happen next.

As he came back for a tight second run to midwicket, Stokes dived and inadvertently deflected the ball - thrown in by Martin Guptill - to the boundary. The end result was one of the most unusual sixes you are ever likely to see and suddenly England needed just three from two deliveries.

NO WINNER AFTER 100 OVERS

To his credit, Boult responded superbly, and a fine yorker limited Stokes to a single from the penultimate delivery, with Adil Rashid run out at the non-striker's end as he chased a second that was never there to keep his partner on strike.

Stokes then played the final ball somewhat cautiously and could again only manage one, with Mark Wood also run out to ensure a Super Over was needed to split the teams.

Oh my word. The match is tied and we will have a Super Over to decide the World Cup final.

After such a gripping contest, it was no surprise to see even more twists and turns in the eliminator.

Stokes and Buttler were chosen to lead the England charge and both batsmen hit boundaries off Trent Boult to help Eoin Morgan's men to a healthy total of 15.

That score looked set to be surpassed when Jofra Archer started with a wide and was then taken for 12 in four balls - including a monstrous six over midwicket - by Neesham.

Yet the next delivery brought only a single, putting Martin Guptill on strike for the deciding ball with New Zealand needing two.

In arguably the most dramatic scenes Lord's has ever played host to, Guptill swiped Archer's final ball towards the deep midwicket boundary, where Jason Roy was lurking.

Roy had been guilty of a fumble earlier in the over, but on this occasion, he was not found wanting.

An accurate throw from the deep enabled wicketkeeper Buttler to break the stumps with Guptill well short of his ground and England duly celebrated an incredible victory by virtue of their superior boundary count, with the scores tied once again.

A day that we will remember forever pic.twitter.com/ZGKBGMUrNk