Rumour Has It: Man United raise Pogba price as Juve give up 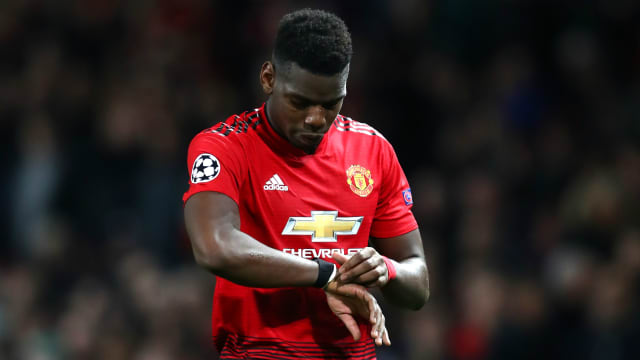 Paul Pogba's future at Manchester United seems to be getting messy and Juventus have no interest in being involved.

Linked with Real Madrid, Pogba, 26, wants to leave Old Trafford in the close season, according to his agent.

But United will demand plenty for the France international and his former club Juve are no longer in the race.

Manchester United are now asking for €200.5million (£180m) for Pogba, according to the Mirror and The Sun.

The reports say the Premier League giants were angered by Pogba's agent Mino Raiola expressing his client's desire to leave.

Pogba arrived at United for £89m in 2016 and the club's latest asking price is more than double that.

But there will be no Turin return for Pogba, with the Daily Mail saying Juventus have ended their interest, opening the door for Real Madrid.

Man Utd at war with Paul Pogba's agent after they raise asking price to £180million | @ncustisTheSunhttps://t.co/79uiPvgqYa

- One player set to head to the Serie A champions is Matthijs de Ligt. De Telegraaf report Juventus and Ajax have reached an agreement of €70m plus variables for the star centre-back.

- Barcelona seem to be making some progress in their pursuit of Neymar. According to Bild, Barca will offer up a list of four players to Paris Saint-Germain, who would agree to sign three and accept a fee in the region of €130m. Reports suggest the likes of Philippe Coutinho, Ousmane Dembele, Samuel Umtiti and Nelson Semedo are expendable at Camp Nou.

- Inter's chase of Romelu Lukaku has appeared difficult and there are few signs of that changing any time soon. Manchester United want more than €83.5m (£75m) – what they paid for the striker in 2017 – for the Belgium international, according to BBC Sport, leading to suggestions Lukaku is set to stay at Old Trafford.

All summer he's been strongly linked with a move to Italy but it looks like Romelu Lukaku will be staying at #MUFC.

- Hakim Ziyech impressed for Ajax last season, but not quite enough to earn a move to Arsenal. According to BBC Sport, the Premier League club have ended their interest in the attacker.

- West Ham are searching for a replacement for Marko Arnautovic after the forward's move to China. The Guardian say West Ham have held talks with Eintracht Frankfurt over Sebastien Haller, who is valued at around £40m (€44.6m) and is also a reported target for Manchester United.