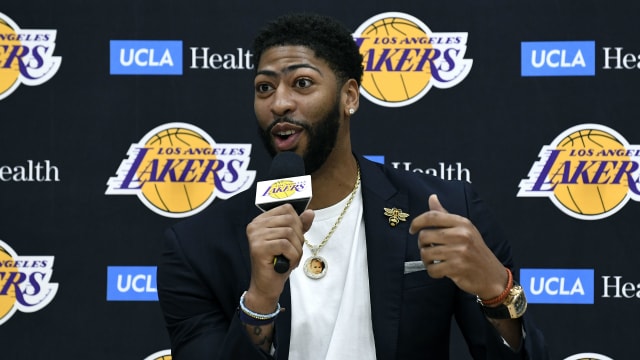 Anthony Davis is thrilled at the prospect of linking up with "great leader" LeBron James at the Los Angeles Lakers.

The six-time All-Star was traded to LA by the New Orleans Pelicans earlier this month and will join three-time NBA champion James in attempting to return the Lakers to the playoffs for the first time since 2012-13.

James and Davis have previously teamed up at the 2012 Olympics, as well as at All-Star Games, but the latter is relishing the opportunity to work with his fellow superstar on a more regular basis.

"The things he does on the floor are pretty amazing," Davis told a news conference on Saturday.

"You see it on TV and when you're a fan you watch it a lot but I've never really had a chance to experience playing alongside him. The 2012 Olympics I didn't play much, I was the towel guy, and we had a bit of time during All-Star Games.

"To get a full season and see the things he's able to do – pass, shoot, he talks well defensively, he's a great leader, I'm excited to get a lot of that this season and go from there."

Taking the number all the way back to elementary school! #3

And Davis believes the Lakers, who finished 10th in the Western Conference last season with a 37-45 record, have put together a roster to challenge in 2019-20.

"It's gonna be fun for sure," he said. "I'm excited about it. The league has grown, it's better, all the players teaming up and spreading that talent throughout the league, it's gonna be a fun season.

"I like our roster, I like every player we have, I'm excited and I'll put our roster against anybody, it feels like in a seven-game series we'll come out victorious."

Davis also discussed waiving his $4million trade kicker, a decision he made in a bid to give his new franchise greater financial power to bring in more talent.

Kawhi Leonard, an NBA champion and Finals MVP with the Toronto Raptors last season, was a target for the Lakers before he completed a switch to city rivals the Clippers.

"Any time you can acquire a player like Kawhi, you have to do almost anything to get a guy like that," Davis said.

"It didn't work out for us but I still wanted to make sure I did whatever to help the team. That $4m was to add more money to a player's contract, or get another guy, then by all means I was gonna do that and we did a great job using that throughout the entire team."