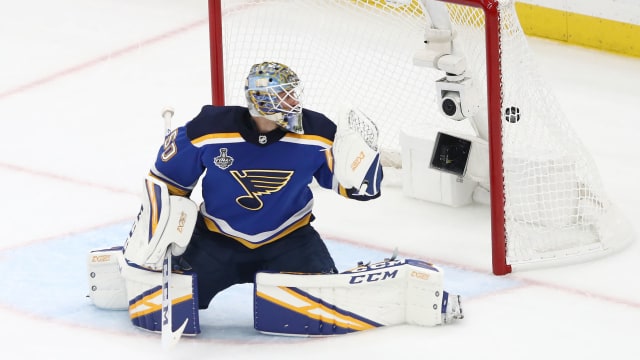 The Blues rewarded Binnington with a two-year deal worth $8.8million, avoiding arbitration with the Calder Trophy finalist.

Binnington was called up to the Blues in the middle of the season and took over the starting job in January when St Louis had the worst record in the NHL.

He proceeded to go 24-5-1 and won 16 games in the playoffs to lead the Blues to their first Stanley Cup title.

BREAKING NEWS: Jordan Binnington has agreed to a two-year contract with an annual average value of $4.4 million. #stlblues

"I'm happy to get this deal done with the St Louis Blues," Binnington told stlouisblues.com. "To the city of St Louis, thank you for welcoming me in and trusting me to do me.

"I'm excited and motivated to keep doing my job and keep bringing success to the St. Louis Blues organisation."

Binnington finished second in the Calder Trophy voting to Vancouver Canucks forward Elias Pettersson and was in contention to win the Conn Smythe Trophy, which is awarded to the best player in the postseason.

The 26-year-old went 16-10 in the playoffs with a .914 save percentage and a 2.46 goals against average. He was removed from just one game and returned to start the next one and won that in the Stanley Cup Final against the Boston Bruins.

"We are pleased to have Jordan signed for two more years," Blues general manager Doug Armstrong said. "His play was outstanding and we look forward to seeing him continue to be a major contributor for our team."