Stokes is the key to England success - Hogg 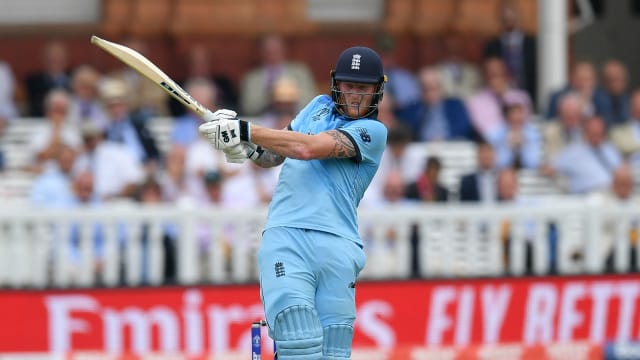 Hogg helped Australia to World Cup glory in 2003 and 2007 and is expecting tournament hosts England to lift one-day international cricket's biggest prize for the first time.

Stokes has hit 381 runs at 54.42 during the World Cup and has also chipped in with seven wickets for an England side who booked their place in the Lord's decider with an eight-wicket thrashing of Australia on Thursday.

"They've been dominating international cricket in the one-day scene over the past two years, but the way they handled that pressure situation against Australia - that was a huge moment for them. I thought they were going to buckle under pressure.

"For England, the middle order, I still think is vulnerable. But they've got Ben Stokes down there. With the bat and ball, he handles the pressure situations and he is the key for England for me."

In two days, there'll be a new home for this #CWC19pic.twitter.com/B8oQlPkcql

Hogg is insistent the decider will be close - and decided by the impact all-rounders can have with the bat.

That is despite the fact England openers Jason Roy and Jonny Bairstow have posted four 100-plus partnerships for the first wicket in seven attempts at the tournament.

"I don't think the English openers are going to have that success again in the final," he added.

"The game will be won by the all-rounders, so [Jimmy] Neesham, [Colin] de Grandhomme versus Ben Stokes and [England wicket-keeper Jos] Buttler."

Hogg also warned against complacency for England. Eoin Morgan's side enter the final on the back of successive wins against India, New Zealand and Australia, form that has them big favourites to win the World Cup.

"New Zealand aren't the Easybeats," he said. "They stand up, they fight. I think the key player for NZ is [Matt] Henry. Can he continue the momentum that he had against the Indians in the semi-final with a beautiful opening spell?

"They had Tim Southee there as opening bowler for a long time but he hasn't been in form. Henry's taken that spot and he's holding the fort at the moment. He is the key for NZ to continue handling that pressure."