If Messi wants to play with Martinez, then he goes to Inter - agent 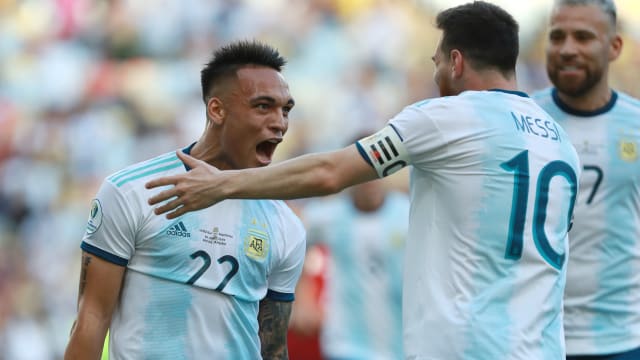 Lionel Messi should join Inter if he wants to play with Lautaro Martinez, says the latter's agent.

Martinez has been linked with Barcelona, although Friday's capture of Atletico Madrid forward Antoine Griezmann may end that speculation.

Messi and Martinez teamed up at the Copa America as Argentina reached the semi-finals before losing to hosts Brazil.

Beto Yaque, Martinez's representative, previously confirmed Barcelona have shown interest in his client, but the agent said the striker will be staying put at Inter.

"He can't wait to start with [new Inter head coach Antonio] Conte," Yaque told FC Inter News. "Messi's words? Being praised by the best in the world is beautiful and very satisfying.

"Lautaro was extremely happy. These words gave him contentment and the desire to work even harder to improve, learn new details and aim to achieve the goals he set himself one day.

"Lautaro only thinks about Inter. He is happy at Inter and dreams big. Conte called him to tell him how to work, that he relies on him and that he is very happy to have him on the team.

"It is true that there is interest on the part of the Blaugrana for Martinez. None of the Spanish club has contacted us officially. They are rumours that somehow we know to be truthful. But I repeat: Lautaro remains in Milan.

"Let's close it with a joke: if Messi wants to play with Martinez, then he goes to Inter. Let's hope. It would be great for the Nerazzurri if that happened!"

"What changes if Lukaku and Dzeko arrive? I believe that there must always be healthy competition," Yaque added.

"Nowhere in the world does anyone have the place bought or insured. I know perfectly well that Inter can negotiate huge level strikers, but I believe blindly in Lautaro's qualities and in what he can give."

Inter signed Nicolo Barella from Cagliari on Friday, the midfielder joining initially on loan although the club have an obligation to complete a permanent deal potentially worth up to €50million for the Italy international.