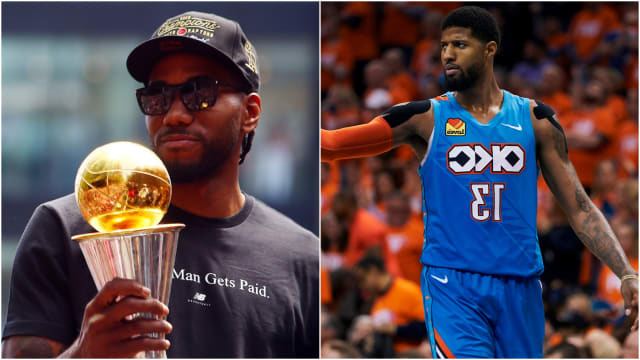 There is never a dull day in the NBA, but this past weekend may have been the craziest moment in league history.

We will get to that in a second, but we will also touch on the Home Run Derby and the Houston Texans who are looking like a train wreck once again.

All that and more on this week in US Sports.

This was as crazy of an NBA offseason as there has ever been. An MVP candidate (Anthony Davis) was traded to the Los Angeles Lakers, two stars signed with the Brooklyn Nets (Kevin Durant, Kyrie Irving), the Boston Celtics reloaded with an All-NBA guard (Kemba Walker) and the New York Knicks are the Knicks.

But all of that news paled in comparison to what happened in the wee hours of Saturday morning when news broke the Los Angeles Clippers were going to get both Kawhi Leonard and Paul George. While the Leonard news broke first, what we came to find out was Leonard had convinced George to accept a trade to Los Angeles from the Oklahoma City Thunder. So, while he signed seemingly on his own with the Clippers, what actually went down was the George trade was agreed to which sealed Leonard's move to Los Angeles.

Now the Clippers and Lakers have even odds to win the NBA Finals next year, but the Clippers have much of the momentum and possibly the best defensive tandem in the NBA in George, Leonard and Patrick Beverley. The Western Conference is going to be fun next year.

2. Home Run Derby for the ages

For years the Home Run Derby has been stale. A few years ago, the MLB was forced to change the format from 10 outs to a timed round in which players could hit as many pitches as they want rather than being selective and taking pitch after pitch. Some rounds would seem to creep into the 30-minute range and fans were losing interest.

Absolutely no interest was lost on Monday though in a Home Run Derby for the ages. This derby featured a man (Joc Pederson) who hit 39 home runs in a round and lost (Vladimir Guerrero Jr. hit 40) and an event where a rookie bashed 91 balls over the fence and did not win (Guerrero).

There were 321 total homers in the event and the final between two rookies (Guerrero and Alonso) took three overtimes to decide. The Home Run Derby was not boring this year, it was what a Derby was always supposed to be.

The Houston Texans have been one of the better organisations in the NFL over the last several years as they have made the playoffs three of the last four seasons while winning their division five times since 2011. But all that success seems to be in spite of themselves and this offseason is a perfect example as to why.

Houston selected Jadeveon Clowney with the first pick in 2014. He has 29 sacks and 67 quarterback hits in his career and has been named to three Pro Bowls while missing a total of six games over the last four years. And yet, the Texans do not want to sign him to a long-term deal. In fact, they likely will not be signing him to a long-term deal at all this offseason, according to a report from the Houston Chronicle.

Even more damning may be the team's ineptitude in the front office. General manager Rick Smith left last year to take care of his sick wife, but it was reported he did so because of a rift with Bill O'Brien. Then the man hired to replace Smith was fired after one year with the team, but after the Draft. Finally, the team decided on Thursday they were not going to hire a replacement GM and will run the team as a committee next season. The Texans are lucky to be in one of the worst divisions in the NFL, otherwise they may be getting more flak for their actions.

A former WEC title contender has retired. Chad Mendes, who accumulated an 18-5 record and had Conor McGregor beaten and bloodied on short notice, has decided to end his long and illustrious career in the WEC and UFC.

"I just want to say THANK YOU to all my fans and everyone that tuned in to watch me battle!" Mendes wrote on Instagram. "With 29 years of competing and 11 year in the Mma game, I feel it's time for the next chapter in my life! It's been an incredible journey with so many life lesson along the way. I feel extremely blessed to be living this life I live and can't wait to see what the next chapter has in store for me!"

Houston Astros outfielder Jake Marisnick has been suspended for two games after running over Los Angeles Angels catcher Jonathan Lucroy in a game on Sunday, MLB announced on Thursday.

Lucroy sustained a concussion and broken nose on the play and manager Brad Ausmus called for Marisnick's suspension after the game as did St Louis Cardinals catcher Yadier Molina.