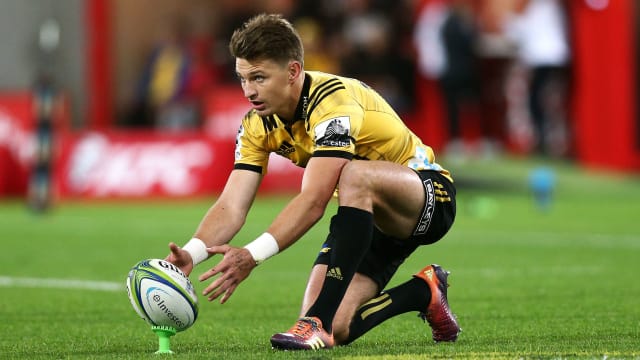 All Blacks star Beauden Barrett has agreed to leave the Hurricanes for the Blues in a blockbuster move after signing a new deal with New Zealand Rugby (NZR).

Barrett – a two-time World Rugby Player of the Year has – penned a four-year contract to keep him in New Zealand through to the end of the 2023 World Cup.

But the 28-year-old and 73-cap New Zealand international will represent the Blues at club level from 2020, leaving Super Rugby rivals the Hurricanes, where he broke through in 2011.

The complex new contract will see first five-eighth Barrett join the Blues midway through the 2020 season, however, as he takes an extended break from rugby at the end of this year.

And Barrett has the option to take a "short playing break" in Japan at some point during the next four years.

"This is obviously a massive decision for me and my wife Hannah and we're really looking forward to the next chapter of our lives," Barrett said.

"The Hurricanes will always be a huge part of who I am. The Hurricanes environment and style of rugby they play has helped me become the player I am today, and I'll be leaving some very good mates.

"Wellington has been my rugby base for many years and university base for Hannah and we'll always have fond memories of living there. Home for us now is Taranaki and Auckland and home and family are immensely important to both of us.

"I'm also enthusiastic about the new challenge I'll get with the Blues over the next four years. They're a team on the rise, I like the way they play and I'm really looking forward to being a part of that.

"While I'm looking forward to what the future holds, right now my focus is on the international season ahead with the All Blacks."

All Blacks head coach Steve Hansen, who will leave his role after the 2019 World Cup in Japan, added: "It's fantastic news for the All Blacks and obviously for the Blues as well. We congratulate Beaudy and his wife Hannah on his decision to stay in New Zealand.

"He's one of the best players in the world, a leader in our team and has been involved in numerous successful campaigns, from Rugby World Cups to Bledisloe Cups, and I believe he's going to get even better.

"Knowing he will be here through to the 2023 Rugby World Cup is massive for the All Blacks as they move into a new phase post-2019."

Blues chief executive Michael Redman, meanwhile, said: "Signing a player of Beauden's calibre has been years in the making.

"While Beauden's personal circumstances created this opportunity, changes we've made to our club in recent years meant for the first time the Blues were a credible option for him. The process has been long and complex, but we believe the outcome is the most influential player movement in Super Rugby history."