Boult: No magic formula behind Black Caps' stunning start in win over India 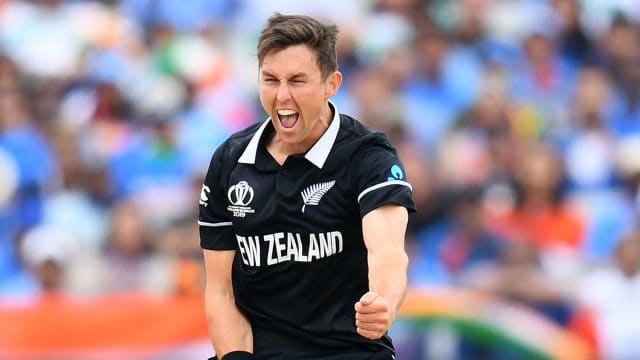 Trent Boult says it was just a case of New Zealand's bowlers "keeping it simple" in the crucial opening spell that left India 5-3 in the Black Caps' 18-run Cricket World Cup semi-final triumph.

In a rain-affected contest that spanned two days at Old Trafford, 2015 finalists New Zealand booked their return to the showpiece despite only posting 239-8 with the bat.

Yet a 19-ball passage from Boult and Matt Henry swung the momentum firmly in the Black Caps' favour as Rohit Sharma, Virat Kohli and KL Rahul all departed for singles.

Henry accounted for Rohit, who had scored five centuries and has more runs than anyone at this World Cup, and his opening partner Rahul, while Boult trapped Kohli lbw and later revealed there were no special plans behind the electric start that led to India being dismissed for 221.

"It wasn't planned, I don't want it to sound like I'm a magician against the best player in the world," Boult said of removing the ICC's top-ranked ODI batsman Kohli.

"We know if we can get sides two or three down inside that first 10 [overs], and put pressure on the middle order, of course it's going to be challenging for anyone.

A stunning opening salvo by the @BLACKCAPS reduced India to 5/3, helping set the platform for a second straight appearance in the @cricketworldcup final.

"We didn't really try too much, in my opinion, it was just about keeping it simple.

"It was nice to put a bit of pressure on those guys but I thought they absorbed it very nicely."

Dinesh Karthik's dismissal meant India were four down by the end of the powerplay and though Ravindra Jadeja (77) and MS Dhoni (50) gave India a fighting chance, the chase got away from them.

India captain Kohli pointed to the shocking start to their reply as being pivotal in the match, with Henry (3-37) enjoying some Old Trafford redemption after returning 1-76 in an expensive nine-over spell against West Indies in the group stage.

"Coming into the semi-final, we talked about it a lot, it doesn't matter what happened in the past," Henry added.

"We knew if we got to 240 we were confident we could defend that if we bowl well.

"I don't think we were expecting the start we got but taking those early wickets meant we could really put some pressure on and squeeze the run-rate."