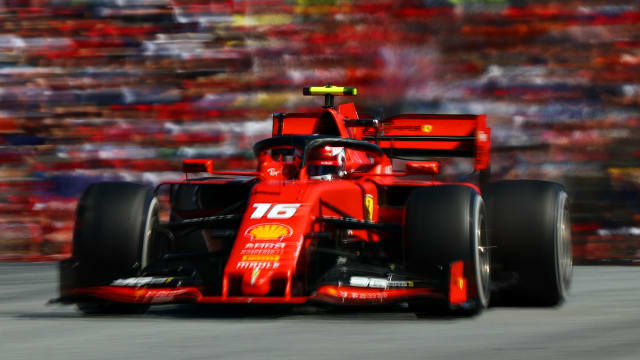 Charles Leclerc may have agonisingly missed out on glory in Austria but Ferrari do not expect to be battling for glory at the British Grand Prix this weekend.

Leclerc qualified on pole with a track record at Spielberg, only for Max Verstappen to get past him with three laps remaining and take a surprise victory – one that was finally confirmed three hours after the chequered flag due to the stewards investigating the Red Bull driver's overtake of the Monegasque.

Ferrari saw their hopes of a first win this season evaporate late on for the second time after an engine issue had denied Leclerc in Bahrain, but team principal Mattia Binotto does not imagine their breakthrough coming at Silverstone.

"Silverstone is one of the toughest tracks of the season, providing a real test of a car's set-up and balance. Tyres also come under a lot of strain here and the amount they wear plays a key role in how your race pans out," said Binotto.

"We do not expect Silverstone to suit our car particularly well, but at every race, we have seen that the balance of power can change, often unexpectedly.

"For the British Grand Prix we are bringing a further small aerodynamic modification as we continue to push hard on the development of our car.

"The weekend will also be an opportunity to increase our understanding of the recent work we did, which has seen us close the gap to our competitors on specific types of track."

Drivers and teams will have to contend with a new challenge at Silverstone after the track was resurfaced for the second time in the last two years.

So much history, so many memories

This week, we're heading to @SilverstoneUK for the 53rd time#F1#BritishGPpic.twitter.com/alZ6Mahmed

Verstappen became the first non-Mercedes driver to win this season in Austria - and Red Bull boss Christian Horner feels the 21-year-old is flourishing as the main man in their garage.

Horner said: "Since Daniel [Ricciardo] has left, Max has assumed the role of the senior driver within the team and the responsibility that goes with that. There's a different level of maturity, of direction and sense of purpose with him. That has really rounded the package with him."

Ricciardo left Red Bull to join Renault but has finished in the points just three times this season.

"I feel like there is maybe something more fundamental with the car that we have not got on top of yet because we have changed a lot and always ended up with the same outcome," he said after placing 12th in Austria.

Toro Rosso driver Daniil Kvyat said of the new Silverstone surface: "On Friday, it will be interesting to find out just how different it is and what the new tarmac will be like.

"It will be an important factor because the lateral loads on the tyres, with all the high-speed corners here, are very high."

Lewis Hamilton has the chance to record his sixth British Grand Prix win, which would be more than any other driver.