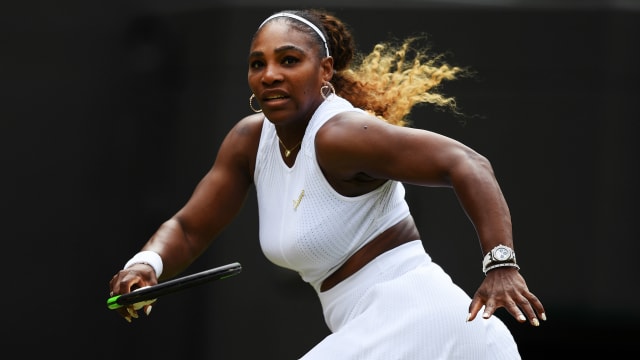 Serena Williams breezed into the quarter-finals of Wimbledon with a 6-2 6-2 victory over Carla Suarez Navarro.

Previous form offered little indication that Williams' pursuit of a record-equalling 24th grand slam singles title would be knocked off course by Suarez Navarro, who had failed to win a set in their six previous meetings.

This proved a similarly forlorn assignment for the 30th seed, despite some good moments in the middle of each set as errors flowed from her esteemed opponent's racquet more frequently than might have been expected.

Williams will face Alison Riske in the quarter-finals after her compatriot downed world number one Ashleigh Barty via a gruelling 96-minute encounter on Number Two Court.

Over on Centre, early breaks at the start of each set were key - Suarez Navarro unhelpfully setting the tone for herself with a double fault on the opening point.

Williams converted her second break point but her Spanish opponent avoided any further damage until the seventh game.

A crunching backhand gave Williams the opening after a third deuce and Suarez Navarro sent her own shot from that wing into the net.

The contest threatened to race away from the 30-year-old as she coughed up two more service games to be down 0-3 in the second.

Things had arguably become too easy for Williams, who was jolted by being broken to love in the next game and needed an assured passing shot to end a run of six consecutive points lost.

Serena reacted exuberantly to a driven forehand winner that saw off another service wobble to set up a hold at 4-2 and a glorious cross-court backhand to break for a fifth time in the contest meant Suarez Navarro's race was run.