Rumour Has It: James to stay in Madrid – by joining Atletico 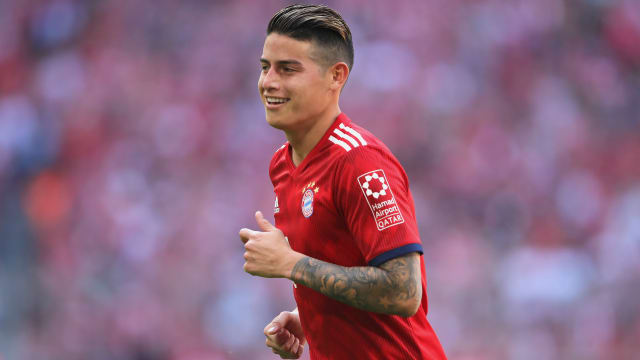 James Rodriguez could yet be staying in Madrid – by moving to Atletico.

James, 27, is set to leave Real Madrid after Bayern Munich opted against exercising their purchase option for the playmaker at the conclusion of his two-year loan deal.

It seemed the Colombia international was likely to move to Napoli, but interest from Atletico has, at least, slowed down that potential switch.

According to Gol Caracol, James is enjoying the interest from Atletico Madrid.

The report says Atletico would be ready to invest the €120million they are expected to receive from Barcelona for Antoine Griezmann on James.

With Joao Felix having already arrived at the Wanda Metropolitano, Diego Simeone could have plenty of attacking talent to work with next season.

- Griezmann is set for a fine. AS report the forward, expected to join Barcelona, did not report for the start of Atletico Madrid's pre-season and could face a fine. The France international is reportedly in Ibiza on holiday.

- Paul Pogba will join Manchester United on their pre-season tour despite wanting a move from Old Trafford. The Mirror report Real Madrid – who are eyeing the midfielder – told Pogba to make the trip, unwilling to risk upsetting the United hierarchy.

- Inter are still trying, unsuccessfully, to find a deal for Manchester United striker Romelu Lukaku. La Repubblica report Inter offered either Mauro Icardi or Radja Nainggolan as part of a deal for Lukaku, but that was rejected.

- Just as it looked like his Valencia deal was just about done, Celta Vigo forward Maxi Gomez may have had a change of heart. West Ham have offered to meet Gomez's £44.9m (€50.1m) release clause, according to Sky Sports, who say the Premier League club – who sold Marko Arnautovic to Shanghai SIPG – want to pay in instalments.

- Liverpool could be signing another young talent. The Telegraph report the European champions are set to sign England Under-17 midfielder Harvey Elliott, the 16-year-old having left Fulham and decided to head to Anfield over several European giants. Liverpool have already added 17-year-old Dutch defender Sepp van den Berg this close season.