Barty and Pliskova fall at Wimbledon as Gauff bows out 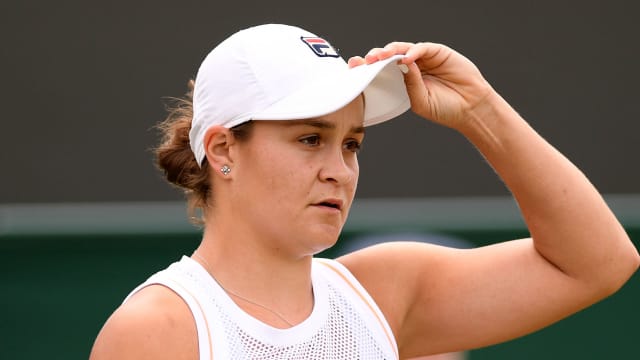 World number one Ashleigh Barty and Karolina Pliskova crashed out as the women's quarter-final draw opened up at Wimbledon.

Barty went down 3-6 6-2 6-3 in a compelling contest against Alison Riske on No. 2 Court, while Czech Republic's third seed Pliskova went down to compatriot Karolina Muchova 4-6 7-5 13-11 in an epic encounter.

Riske will face Serena Williams – a 6-2 6-2 winner over Carla Suarez Navarro - in an all-American quarter but 15-year-old sensation Cori Gauff had her superb run at SW19 ended by Simona Halep in straight sets.

French Open champion Barty had not lost for two months heading into her fourth-round match but had no complaints as Riske turned in a stirring display.

"Overall I didn't play a poor match. When I needed to, when the big moments were there, Alison played better," she said. "Tough one to swallow but I lost to a better player."

Riske is relishing her reward of a showdown with Williams, who she has partnered in Fed Cup doubles.

"I think it's super exciting. I played doubles with Serena, but never played against her. It will be an interesting match," she said.

"I'm ready for a war. She's the greatest athlete I think that's ever been on the women's side. It's going to be a huge challenge."

Alison Riske recovers from a set down for the third time this tournament - the latest coming against world No.1 Ash Barty #Wimbledon | @Riske4rewardspic.twitter.com/oLMTtqpTgF

Already a favourite at the All England Club, Gauff was unable to overturn the odds once more against the former world number one Halep.

The youngster seemed to be hindered by illness and called for the doctor in the second set.

"I learned a lot. I learned how to play in front of a big crowd. I learned what it was like to be under pressure. I'm really thankful for this experience."

Konta will meet veteran Barbora Strycova – a winner in three against Belgium's Elise Mertens - after bringing Centre Court to its feet at the end of a gruelling battle.

Two-time Wimbledon champion Kvitova did not go down without a fight, saving two match points and breaking Konta to recover from 5-1 down to make it 5-4 in the decider, but the elated 19th seed finished the job.

"Petra started playing incredibly freely and hitting through the ball. The balls were coming at 100 miles-an-hour to me," Konta, who assuaged fears over the ankle treatment she received during the match, told BBC.

"I'm tremendously grateful to be here. The way I'm competing, I'm really happy with that."

Flying the flag @JohannaKonta fights back from a set down for the second match in a row to progress to her second #Wimbledon quarter-final, defeating two-time champion Petra Kvitova pic.twitter.com/UC4IxYpDAO

SVITOLINA LANDING BLOWS ON OTHER SIDE OF THE DRAW

China's world number 50 Shuai Zhang is up next for Halep after beating teenager Dayana Yastremska 6-4 1-6 6-2 to reach a first quarter-final since the 2016 Australian Open.

A keen boxing fan, Svitolina will be optimistic of sealing semi-final berth and potentially landing a knockout blow on one of the favourites.

"I love watching it. In Ukraine there is great fighters," she said, while pursuing a triumph that could place her alongside the Klitschko brothers and Vasyl Lomachenko in her nation's affections.