Rihanna, bees and a comedy collision - the best moments of the Cricket World Cup group stage 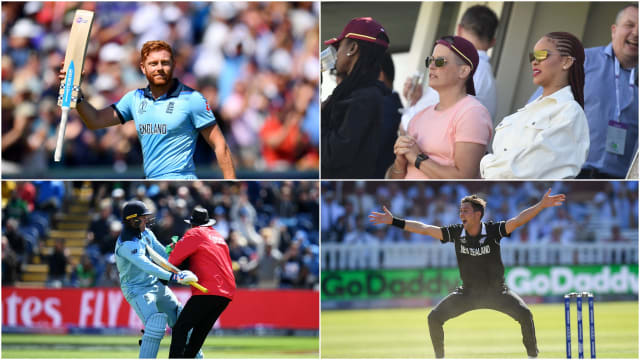 After five arduous weeks, the Cricket World Cup group stage has reached its climax and four teams are left standing.

Hosts and pre-tournament favourites England briefly flirted with a disappointing early exit before rallying to beat India and New Zealand and reach the last four.

Lying in wait are old rivals Australia at Edgbaston on Thursday, while India and New Zealand will do battle first in Manchester in two days' time.

But before we sit back and take in the final acts of a hugely enjoyable tournament, let's review the thrills and spills (and a couple of comedy moments) of an enthralling group stage.

Over a decade ago, Rihanna's smash hit 'Umbrella' enjoyed an extended stay at the top of the UK album charts but there was no need for the brollies at Durham as West Indies faced off with Sri Lanka.

Unfortunately, the Barbados-born popstar saw the Windies beaten by 23 runs, but there was a tearful reunion with assistant coach Roddy Eastwick – a former school teacher of Rihanna's.

Bees create buzz at The Riverside

But it was a swarm of bees that created quite the buzz on social media. The honey-loving insects caused a sudden delay, with players having to hit the deck to take evasive action.

We are very, very, very sorry Joel Wilson…but this was undoubtedly hilarious.

Jason Roy brought up a century in England's beating of Bangladesh but, while tracking the progress of the ball, did not see the poor, unaware umpire who was completely clattered by the opener in comical scenes.

Once back to his feet, a slightly sheepish Wilson saw the funny side.

An unusual way to celebrate 100 for Jason Roy! We're glad umpire Joel Wilson is on his feet again and smiling!   #CWC19 | #ENGvBAN pic.twitter.com/pCAvhzc1Px

England's defeats to Sri Lanka and Australia drew plenty of criticism at home, not least from Michael Vaughan, which led to an unsavoury back-and-forth with Jonny Bairstow.

But Bairstow responded in impressive fashion, making centuries against India and New Zealand to help England progress to the last four.

Celebrating that latter century, Bairstow rubbed his hair in a seemingly light-hearted jibe at Vaughan's previous treatment to bolster his hairline.

Two stunning catches, but who did it better – Ben Stokes or Chris Woakes?

All-rounder Stokes plucked a stunning one-hander in the deep off Andile Phehlukwayo in the tournament's opening match between England and South Africa at The Oval.

Not to be outdone, Woakes took a brilliant full-length dive on the boundary to send Rishabh Pant packing in England's much-needed win over India. Superman, eat your heart out.

Afghanistan had the chance for a famous upset against India at the Rose Bowl. Twelve runs were needed off four deliveries…enter Mohammed Shami.

The paceman took the vital wicket of dangerman Mohammad Nabi and followed up with the scalps of Aftab Alam and Mujeeb Ur Rahman to end Afghanistan's hopes. Three wickets in three balls.

New Zealand lost out to trans-Tasman rivals Australia at Lord's, but Trent Boult had individual reason to celebrate with a hat-trick of his own.

A stunning finish in the final over of Australia's innings saw Usman Khawaja, Mitchell Starc and Jason Behrendorff fall to full, in-swinging deliveries.

Boult, who has donated the ball to the MCC Museum, had to endure a nervy wait after a Behrendorff review.

What a way to make a comeback, Mohammed Shami! #TeamIndia pic.twitter.com/v2VJeyStlP

England made a dismal start in their pursuit of 286 against Australia at Lord's, slumping to 53-4.

Ben Stokes' courageous 89 threatened a fightback at the Home of Cricket. That was until Mitchell Starc's unplayable yorker swung in late to rattle the base of the stumps to end Stokes' resilience and England's chances of victory.

Afghanistan finished without a point after the group games but will rue a couple of missed opportunities – not least versus Pakistan, who slumped to 156-6 chasing 228 at Headingley.

But captain Gulbadin Naib gave up 18 costly runs in the 46th over and Pakistan edged home with a couple of balls to spare against the underdogs in a dramatic finale.

Chris Gayle's final World Cup did not exactly go to plan. The explosive batsman made 242 runs from nine innings as West Indies – fancied by many to challenge – crashed out.

His final knock against Afghanistan yielded just seven runs, but there was time for some typical flamboyance when the charismatic Gayle celebrated a low catch with some press-ups.

A tidy turn with his occasional off-spin also yielded 1-28 and the 39-year-old lapped up the acclaim at stumps.

A lovely moment at the end of the game as Chris Gayle walks off the pitch for potentially the last time in World Cup cricket   #CWC19 | #MenInMaroon pic.twitter.com/3xVZS0h5AV