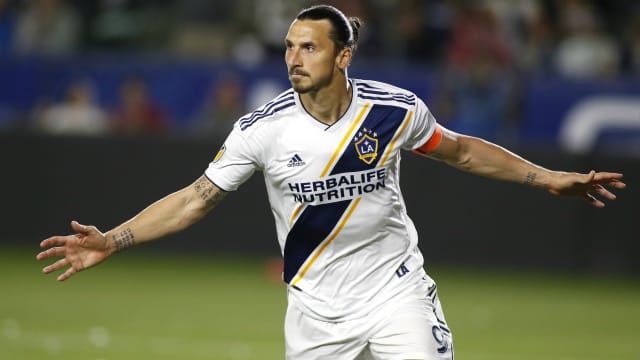 Zlatan Ibrahimovic's brace helped LA Galaxy to a 2-0 win over Toronto in MLS on Thursday.

Ibrahimovic, with his name misspelled on his shirt, scored twice in the second half at Dignity Health Sports Park, moving on to 13 MLS goals this season.

The Swedish striker opened the scoring with 15 minutes to go, brilliantly heading in an Efrain Alvarez cross.

Ibrahimovic sealed the win in the 89th minute, taking a cross from Emil Cuello before finishing to wrap up Galaxy's victory on Independence Day in the United States.

Dallas climbed into third courtesy of a 2-0 win over DC United, who had substitute Luciano Acosta sent off for a stamp on Paxton Pomykal at Toyota Stadium.

Wayne Rooney earlier had a red card downgraded to a booking on review after he caught Dallas' Michael Barrios with a high challenge.

The day's other game, between the Colorado Rapids and New England Revolution in Denver, was delayed numerous times due to lightning before the Revolution wrapped up a 2-1 win over their 10-man hosts, the encounter finishing after 00:00 local time (06:00 GMT).