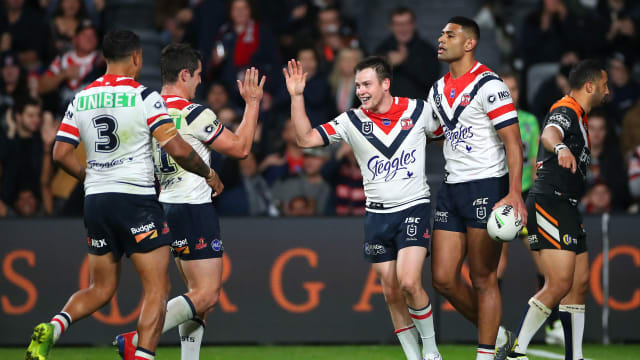 Luke Keary pulled the strings on his return as Sydney Roosters beat West Tigers 24-16 to go second in the NRL ladder.

Keary was back in action after five weeks out with concussion and the five-eighth made up for lost time at Bankwest Stadium on Friday.

Ryan Matterson, Paul Momirovski and Esan Marsters went over for Wests, but they were unable to see off a Roosters side that had lost four of their previous five matches.

The pass.... THE. PASS! #EastsToWin#NRLTigersRoosterspic.twitter.com/pQvdogIIxH

Butcher went over only three minutes in after taking an offload from the fit-again Jared Waerea-Hargreaves and Keary tossed a brilliant high one-handed pass under pressure to put a try on a plate for Tupou after Matterson touched down at the other end.

The Tigers hit the front with two tries early in the second half, Momirovski finishing before Marsters - who scored four points from the tee before the break - crossed.

Trent Robinson's men, beaten by Melbourne Storm last week, were not at their best but Keary laid on another try for Radley after an incisive run from Mitchell, who added the extras to put the Roosters back in front.

Keary then threw an inside pass for Mitchell to plough his way over the whitewash for a try of his own, which he converted as the Roosters moved above rivals South Sydney Rabbitohs.