Athletics closing in on Rays in wild-card race 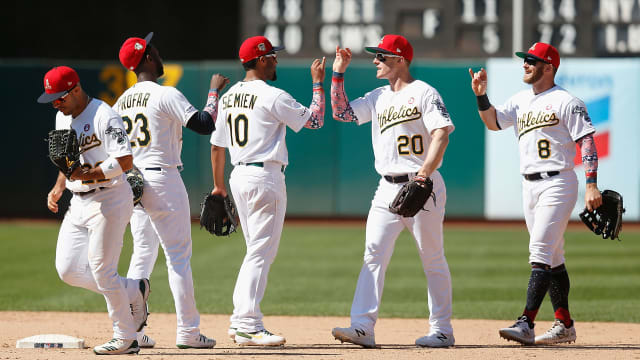 The Oakland Athletics sealed a series win over the Minnesota Twins in MLB on Thursday.

Oakland defeated the Twins 7-2 to take two out of three games in the series from the American League (AL) Central leaders and move to 48-40 this season.

Marcus Semien hit a grand slam to lead the Athletics to the win and Oakland, all of a sudden, are just two games back of the Tampa Bay Rays for the first wild-card spot in the AL.

Tampa Bay lost to the New York Yankees 8-4 on Thursday and have now taken losses in 10 of their past 17 games.

Meanwhile, the Athletics have won five of their past six.

After starting the year 15-21, Oakland are on the precipice of getting home-field advantage in the wild-card game.

Love a good grand finale at the fireworks show#RootedInOaklandpic.twitter.com/nwglTzKITW

Jose Ramirez went two for five with two home runs in the Cleveland Indians' 8-4 win over the Kansas City Royals.

Matthew Boyd gave up nine hits and four runs, but he recorded 16 outs, 13 of which came via the strikeout in the Detroit Tigers' 11-5 win over the Chicago White Sox.

Kris Bryant went four for five, finishing a triple shy of the cycle in the Chicago Cubs' 11-3 win over the Pittsburgh Pirates.

Yasmani Grandal went 0 for four with two strikeouts in the Milwaukee Brewers' 1-0 loss to the Cincinnati Reds.

Lourdes Gurriel made a spectacular diving play on Mookie Betts.

Both of these teams are in the National League (NL) wild-card race and this series, which is the last before the All-Star break, could go a long way in determining whether one, or both of these teams, are buyers or sellers at the trade deadline.