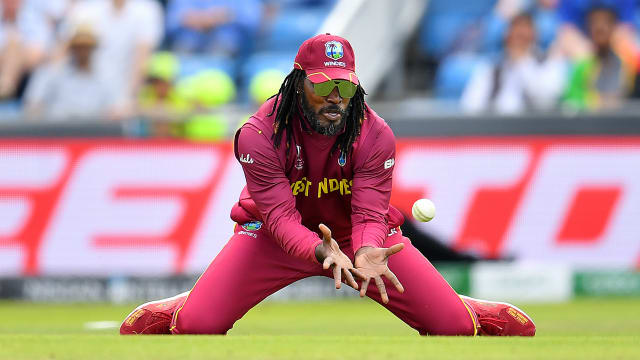 West Indies signed off from the Cricket World Cup with a 23-run win over Afghanistan at Headingley - but Chris Gayle missed out on a place in the history books.

Victory meant the Caribbean side bookended their campaign in England with successes, having beaten Pakistan in their opener.

The rest of their campaign was better forgotten, however, and this could have provided another low moment until a mid-innings collapse from Afghanistan handed over the initiative.

Despite posting 311 for six, West Indies lost opener Gayle for seven. It was a third single-figure score of a disappointing World Cup for the veteran batsman and he finished the tournament as his team's fourth highest scorer.

Gayle said before the World Cup this would be his goodbye to ODI cricket but the 39-year-old has since suggested he intends to play on. But in this sort of form, West Indies might do well to consider other options.

This was surely a farewell to the World Cup for the showman and, after he was bogged down by Afghanistan's attack and looked to clout Dawlat Zadran over the off-side field, he nicked behind to Ikram Alikhil.

Evin Lewis showed better patience to make 58, Shai Hope plundered 77 and Nicholas Pooran scored 58 - with Gayle the only West Indies batsman to lose his wicket for a score below 30.

Afghanistan were then bowled out for 288, their chief contribution coming from 18-year-old Alikhil who reached 86 until he was defeated by Gayle's off spin.

This is the last time we'll see @henrygayle at a Cricket World Cup..wow...how do you say goodbye? pic.twitter.com/5nY6EVX4Fs

AFGHANISTAN SAVE THEIR BEST FOR LEEDS

Afghanistan have given perhaps their best two performances of the World Cup at Headingley. The Pakistan match that went down to the wire was a treat, albeit slightly marred by crowd disturbances, and showed Afghanistan had the ability to rattle one of world cricket's biggest forces. This was a similar situation, with West Indies looking possibly out of sight after going through the 300-run barrier before being ultimately relieved to fend off the minnows.

ON THE NEXT FLIGHT

West Indies began the World Cup brightly with a thumping seven-wicket win against Pakistan, and then gave Australia a good game second time out. The rest of their campaign has been mostly dire, and they knew their fate long before this match. They can watch the semi-finals from home, if they can stomach it. For all the talk of West Indian cricket being on the cusp of a major resurgence, the last five weeks have proven a major bump in the road. Defeat today would have been intolerable - no wonder they were celebrating so effusively at the end after a string of spectacular catches meant they finished a tournament packed with many lows on a rare high.

YOUTH HAD ITS DAY

The West Indies middle order looks packed with players that could stay there for years to come, and young Alikhil delivered a dazzling innings for Afghanistan. In four years' time, and with the right nurturing before India hosts the next World Cup, both of these sides could be looking forward to a stronger performance.