Trout pulling away in MLB MVP race despite LeMahieu's heroics 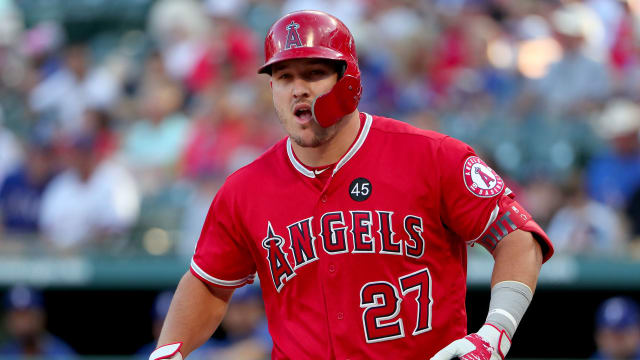 DJ LeMahieu has been incredible for the New York Yankees this season, but Los Angeles Angels star Mike Trout is the front-runner for the MLB MVP in the American League.

Trout went two for five with two home runs and four RBIs in the Angels' 6-2 win over the Texas Rangers on Wednesday. He now leads LeMahieu in every category offensively except two — batting average and hits.

In fact, LeMahieu leads Trout significantly on those fronts, as he finished the Yankees' 5-1 win over the New York Mets with a .342 average and 110 hits for the season.

But here is the kicker, despite trailing by nearly 50 points in average, Trout is beating LeMahieu by 65 points in on-base percentage.

And, for those out there who say a player who plays for a losing team cannot win an MVP, go talk to Giancarlo Stanton, whose Marlins went 77-85 in 2017 when he won the award.

Trout – a two-time AL MVP and eight-time All-Star has willed a mediocre and injured Angels team over .500.

Washington Nationals ace Stephen Strasburg tossed 7.3 innings of scoreless baseball with 14 strikeouts in a 3-1 win against the Marlins.

Chicago Cubs catcher Victor Caratini homered from both sides of the plate in a 6-5 loss to the Pittsburgh Pirates.

Cincinnati Reds starter Sonny Gray struck out 12 batters in eight scoreless innings in a 3-0 victory over the Milwaukee Brewers.

Tampa Bay Rays reliever Jose Alvarado gave up five earned runs in 0.3 of an inning in a 9-6 loss to the Baltimore Orioles.

Nolan Arenado is a cheat code. The Houston Astros, though, defeated the Colorado Rockies 4-2.

Too easy for Nolan pic.twitter.com/5IXltoBRpe

The Phillies need to win the rubber game of this three-game series for a couple of reasons. For one, they need to cut into Atlanta's five-and-a-half game lead in the division, and secondly, a divisional win against one of the best teams in the National League can only build confidence going forward.