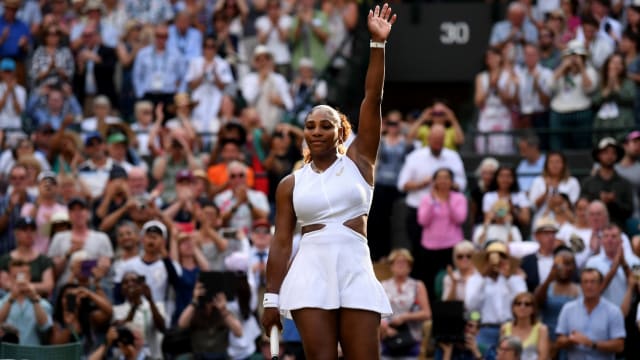 Serena Williams had the support of Meghan Markle on Thursday and revealed her hope to have all of Britain behind her when she plays in the mixed doubles with Andy Murray.

Wimbledon great Williams defeated teenager Kaja Juvan in three sets at the All England Club, with the Duchess of Sussex watching on No. 1 Court.

"It's always exciting when she comes out to watch and support the tennis," Williams said of her friend. "I was happy."

Markle's son, Archie, will be christened on Saturday but Williams can at least offer a reasonable excuse for why she will be absent.

"I'm working on Saturday," she joked. "Yeah, so she understands work."

Before then, however, Williams will link up with Murray in mixed doubles action on Friday - and believes she may receive even greater backing when partnering the home favourite.

"Actually I'm curious," the American said. "I'm going to be so happy when I go out there, it's going to be really cool. That's the real reason I wanted to play with Andy."

Top seed Ashleigh Barty got through, though, along with Sloane Stephens and Belinda Bencic.

DAVIS: 'BETTER THAN IT LOOKS'

Kerber's humiliation in defeat to Davis was capped by the American's heavy strapping on her knee, shoulder and, following a first-set slip, ankle.

But Davis insisted she is physically fit despite hobbling through much of her stunning defeat of the 2018 winner.

"I feel good. Tape is a lot better than it looks," she said. "It's just a little soreness with my meniscus on my left side. It's really just prevention at this point, especially on the grass where it can be slippery."

Petra Kvitova was forced out of the French Open with a forearm injury and looked as though she might be heading home early from Wimbledon, too, as she trailed 5-3 in the first and then saw opponent Kristina Mladenovic forge three set points.

While two-time champion Kvitova battled back to win in straight sets, she acknowledged there are still issues with her injury.

@Petra_Kvitova dealt out four consecutive aces on her way to the third round #Wimbledonpic.twitter.com/ed4xYf3CAk

"We'll see how that will look like tomorrow. I really had a tough match today with fast serves flying to me."

Both British players in action on the WTA Tour won on Thursday, with Johanna Konta and Harriet Dart each progressing.

"So I'm really pleased for [the other British players] and myself, for us to be still in the tournament, still going at it."

Dart, meanwhile, was on target in a deciding set to see off Beatriz Haddad Maia and will next face Barty.