Nadal talks up talented Kyrgios - but how badly does he want to win a slam? 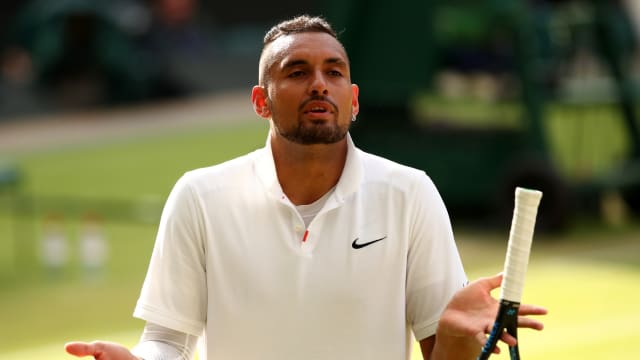 Rafael Nadal has no doubt about Nick Kyrgios' talent but questioned his hunger after the Australian gave the two-time Wimbledon champion a Centre Court scare on Thursday.

Spaniard Nadal needed four sets to get past Kyrgios in the second round, with a gripping encounter seeing the challenger seemingly attempt to wind up both his opponent and umpire Damien Dumusois, who he later described as "horrendous".

Still, Kyrgios managed to combine his antics with a superb display that could easily have been rewarded with victory.

Yet Nadal pointed out how the 24-year-old does not always approach matches with the same level of determination, attributing to his failure to compete consistently at the highest level.

"He's a very top, talented player," Nadal told a news conference. "But there is a lot of important things that you need to do to become a champion, no? He has a lot of good ingredients.

"But, of course, what remains an important one sometimes is the love, the passion for this game. Without really loving this game that much, it is difficult to achieve important things.

"Anyway, with his talent and with his serve, he can win a grand slam, of course. He has the talent to do it. It is true that things can be completely different for him if he wants to play all the matches the same way that he tried today.

"But if you see the first round against Jordan Thompson, he was able to win the match, but the intensity on court, the way that he played, the way that he was focused, was different than today.

It was an assessment Kyrgios accepted was fair, admitting he is not always the "most professional guy".

"I know what I'm capable of. It just depends. I'm a great tennis player, but I don't do the other stuff," he said. "I'm not the most professional guy. I won't train day in, day out. I won't show up every day.

"So there's a lot of things I need to improve on to get to that level that Rafa brings, Novak [Djokovic], Roger [Federer] have been doing for so long. It just depends how bad I want it.

"But, no, at the moment, I don't think I can contend for a grand slam."