Nadal sees off Kyrgios, Evans sheds a tear while Federer has an idea 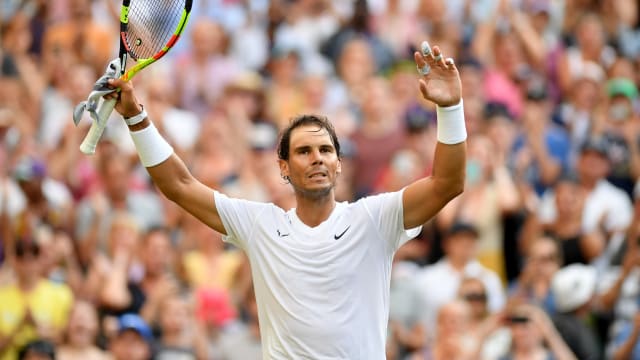 Rafael Nadal savoured a hard-fought victory over Nick Kyrgios on Centre Court in a Wimbledon match full of needle.

Australian Kyrgios recently described his Spanish rival as "super salty", adding extra spice to a second-round clash that saw both players show their frustration at times.

Kyrgios became fed up with umpire Damien Dumusois, engaging in a running conversation that began with complaints about Nadal taking too long between points and culminated in describing the official as "a disgrace".

EVANS, NO HE'S NOT MISERABLE NOW...

The tears Dan Evans shed after sinking seeded Georgian Nikoloz Basilashvili were ones of joy and relief rather than sorrow. On No. 2 Court, Briton Evans won through in straight sets, with his first Wimbledon campaign since 2016 going to plan so far. Evans has made a terrific comeback after serving a ban for recreational drug use, and his attitude, questioned so often down the years, has been spot on.

Just 14 months ago, Evans had no ranking and now he is up to 61 in the world, with plenty of climbing still to be achieved.

"Obviously I just want to do well at this tournament," he said, explaining the emotional reaction. "It was a goal to be in the main draw here. I did that. Obviously I missed out the last few years. To be into the third round is great for me. That was all really, you know.

"A lot of my friends were here, people who have helped me so much. [It] just got the better of me today. There's plenty more tennis to be played in this tournament, so I won't be resting on that win."

Jo-Wilfried Tsonga needed an hour and 46 minutes to get past Lithuanian Ricardas Berankis, almost twice as long as it took him to beat Bernard Tomic in round one.

Tsonga was asked for his reaction to Tomic being fined his entire tournament winnings of £45,000, after being found to have failed to "meet the required professional standards" during their one-sided contest.

And the Frenchman was not happy, hinting he felt the fine implied his own performance was not a factor in Tomic losing so emphatically.

"That's touchy," said Tsonga. "They will do that with him and not with others? And I think it's a little bit too much. I will say it's also, for me, it's like what I did was not win. It's like [I] was just here and I just won because they said he didn't play enough."

Asked if the size of the fine devalued his victory, Tsonga said: "A little bit."

A warm welcome to the Duchess of Sussex on No.1 Court#Wimbledonpic.twitter.com/cnEQjhLMy4

Federer revealed he has spoken to WTA officials about the limitations imposed on young players, who are restricted in the number of tournaments they can contest.

Cori 'Coco' Gauff has caught the eye with a run to Wimbledon's third round but can only play a limited season on tour, with the WTA keen to phase the introduction of youngsters to the tour.

"I understand the rule completely that they want the young players not to play too much," Federer said. "I've told the WTA they should loosen up the rules. I loved seeing [Martina] Hingis doing what she did at a young age."

Federer suggested tennis greats such as Martina Navratilova could mentor the youngsters, adding: I don't have the perfect solution. I see why they did it [placed the restrictions], because we've had the history of some tough parents out there. But at the same time you're also increasing the pressure for that player each week to produce."