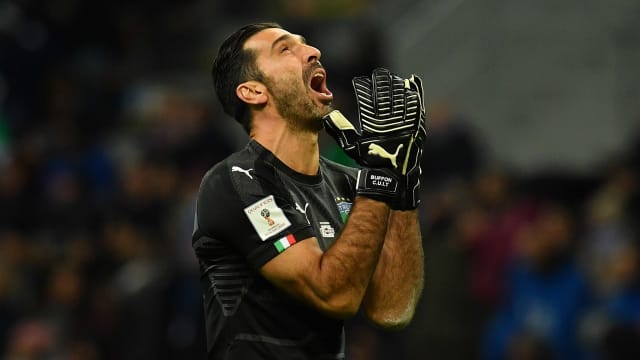 Gianluigi Buffon has sensationally returned Juventus just a year after leaving the club for Paris Saint-Germain.

Buffon had suggested he could take a year off after rejecting a deal for a second season in the French capital.

A new one-year contract with the Serie A champions will instead take Buffon beyond his 42nd birthday.

When he does eventually retire, Buffon will not just be remembered for his electric reflexes and passionate Italian national anthem-singing.

The Juventus stopper also has a way with words that suggests he will not be short of job offers when he does decide to hang up his gloves.

Here, we pick out some of our favourite Buffon quotes from throughout his long and distinguished career.

"My worst vice is gluttony. I try to keep myself under control because I'm an athlete, but once a week I like to pig out and act like a normal person."

"Losing on penalties in 2003 was very painful, but since I was only 25, I was fairly calm because I was convinced I'd win many more. That's the exuberance of youth. I was so close to winning it on that occasion; they missed three penalties in that final - I saved two of them. Strange things happen. It wasn't meant to be and we weren't good enough. In sport and life, those who deserve it more probably end up getting their rewards."

"The pitch is the most beautiful part of the game; it gives you emotions which bring meaning to life. So, I wouldn't like a role as [a club] coach, with the day-to-day nature of it. I wouldn't rule out a role as national coach; you'd still get the emotion of the pitch but with the time and the freedom to devote to other things."

"Maybe I'm the only footballer who isn't interested in cars. My Lancia Y gets me around."

"Messi is an alien that dedicates himself to playing with humans. The only hope is that this Saturday [Buffon was speaking before the 2015 Champions League final] he will be from earth, like the rest of us."

"Even at 80, if suddenly no goalkeeper would be there, they should call me – I would train briefly and then jump in."

"He was born in 1998, right? I had already taken part in the World Cup in France before he was born. This is the joy of life, the great thing about lasting for a long time. You get to meet kids who weren't even born when you already had a good chunk of your career behind you.

"The other day, I worked out that I managed to connect practically three generations. I used to play with those born in the 1950s and 60s, then I'll end up playing against those born after the year 2000. It's an enormous stretch of time.

"It's stimulating knowing that you're facing the future Lionel Messi, Cristiano Ronaldo and Neymar. Maybe in 10 years, when I have hung up my gloves, they will be the seasoned champions and I'll have the memory of playing against them at the start of their careers."

"I scored lots of goals, and when a kid gets lots of goals it's the nicest thing in the world. Then you grow up, become stupid and become a goalkeeper, right? Then you just let goals in."

"The striker who caused me all kinds [of trouble] was Ronaldo, the Brazilian one. He was the perfect player, as he had power, speed, intuition, technical skills and quickness. He was a jaw-dropping player. It seemed like he was created in a lab."

"How do I imagine my last ever game? Maybe I'll go out like [Zinedine] Zidane, headbutting someone on the pitch!"

A tearful #Buffon : "I'm sorry to finish like that but Italy knows how to lift itself."
https://t.co/EqpFo8M4rX #VivoAzzurro #ITASWE pic.twitter.com/2oz1WSs0gG

"I don't watch penalties in my hotel room. I watch naughty videos."

"To the fans it does not matter a damn how you are. You are seen as the footballer, the idol, so no one thinks to stop and ask you: 'Hey, how are you?'

"But I did see a psychologist and that helped me enormously. But it was something I had to re-evaluate. I thought psychologists were people who rob, figuratively of course, money from the insecure. But they are not. They are people who are there to help you and if you find a good psychologist, they will allow you to talk about everything and open up, without the slightest of fears, and that is no easy thing."

"I chose 88 because it reminds me of four balls and in Italy we all know what it means to have balls: strength and determination. And this season I will have to have balls to get back my place in the Italy team."

"You told us that VAR would be used in clear-cut incidents where there were mistakes, but now you are even checking the replays for a trodden toe or a finger in an ear. It's no longer football… it's turning into water polo. It takes too long. I didn't celebrate when we were awarded a penalty because six minutes had passed."

Six #UCL clean sheets in a row for the first time in our history. #FINOALLAFINE pic.twitter.com/ZRosZb8xEN

BUFFON ON… HIS GOAL

"More than 25 years ago I made my vow: I swore to protect you. Look after you. A shield against all your enemies. I've always thought about your welfare, putting it first even ahead of my own.

"I was 12 when I turned my back on my goal. And I will keep doing it as long as my legs, my head and my heart will allow."

"The team gave its all, but a human being cannot destroy dreams like that at the end of an extraordinary comeback on a dubious situation.

"Clearly you cannot have a heart in your chest, but a bag of rubbish. On top of that, if you don't have the character to walk on a pitch like this in a stadium like this, you can sit in the stands with your wife, your kids, having your drink and eating crisps.

"You cannot ruin the dreams of a team. I could've told the referee anything at that moment, but he had to understand the degree of the disaster he was creating."

Buffon spoke after Oliver gave Real Madrid a late penalty that saw them knock Juve out of the Champions League. He was later punished by UEFA.