Gauff backs up Williams win as Halep and Pliskova progress 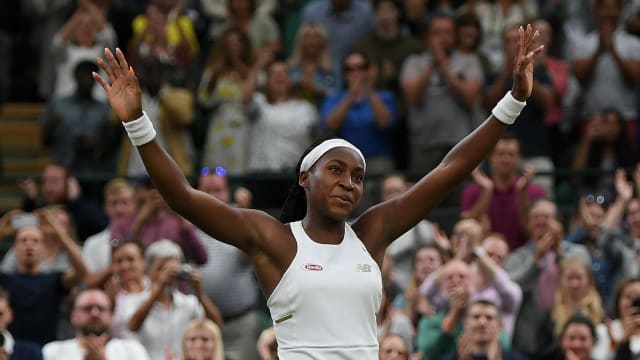 Cori Gauff followed up her victory over Venus Williams by easing past Magdalena Rybarikova in straight sets to book her place in the third round at Wimbledon.

Teenage sensation Gauff showed her win against five-time Wimbledon champion Williams was no fluke with a dominant 6-3 6-3 triumph over Rybarikova on No.1 Court.

Earlier on Wednesday, Simona Halep progressed from an all-Romanian tie against Mihaela Buzarnescu, while third seed Karolina Pliskova continued her hunt for a first grand slam prize with a convincing 6-0 6-4 win over Monica Puig.

It was not all plain sailing for the favourites, though, as Anastasija Sevastova and Madison Keys – 12th and 17th seeds respectively – crashed out.

Margarita Gasparyan, meanwhile, was left in tears as – after she suffered an awkward landing – she had to retire with the score at 5-7 6-5, handing eighth seed Elina Svitolina a reprieve.

Gauff stunned Williams in the first round, and clearly took plenty of confidence into Wednesday's clash with Rybarikova, making light work of her opponent to set up a third-round tie with Polona Hercog, who beat Keys 6-2 6-4.

"I think I played well, especially on the pressure points. She was serving amazing so it was hard to return sometimes," 15-year-old Gauff told BBC Sport.

"There's so much going on. I'm still shocked that I'm even here. I think I can beat anyone who's across the court. If I don't think I can win the match then I won't even step on the court."

Former world one Halep dominated early but lost her form in the second set to hand compatriot Buzarnescu a lifeline.

Halep rallied to break twice and win the third set, though, and she will now face two-time semi-finalist Victoria Azarenka, who overcame Ajla Tomljanovic 6-2 6-0.

"I think I'm playing okay. It's always tough on grass. But it was a tougher match than first one, so it was good that I could win it," Halep told a news conference. "I felt confident on court. I felt strong mentally."

WOZNIACKI EGES IT AS PLISKOVA CRUISES

Like Halep, Wozniacki was also run close in her contest with Kudermetova, who stunned the world number 19 when they met at the French Open in May.

Kudermetova forced a tie-break in the first set, but Wozniacki's experience eventually told when she reeled off the last two points in a row before closing out the win in style.

Pliskova, meanwhile, had no such issues against Puig, hitting nine aces and 23 total winners in her one-hour victory.