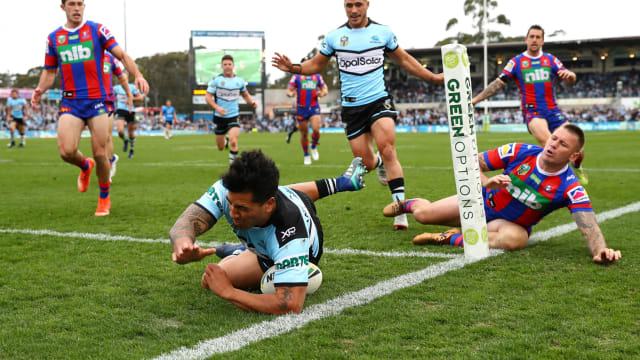 Castleford have signed Tongan winger Sosaia Feki on a three-year deal starting in 2020.

The Auckland-born 28-year-old joins the Tigers from Cronulla-Sutherland Sharks with whom he won the 2016 NRL Grand Final.

Feki has scored 62 tries in 139 games for the Sharks and is relishing his fresh start at the Mend-A-Hose Jungle.

He told Castleford's website: "I've been at Cronulla for seven years now, I've been comfortable here but this is a new chapter in our lives and my partner and I are really excited to come across to Castleford and to Super League.

"It's going to be a new challenge, but Cronulla play an attacking style of rugby as well so hopefully I can bring that over there."

| A few pics of our new signing Sosaia Feki ... who's looking forward to seeing him in Tigers colours?#COYFpic.twitter.com/zWqaOMZBTC

He will find familiar company and said: "I've played with Junior Moors at the Sharks and I know Jesse Sene-Lefao already as well. I've been messaging him, and he's been tipping me up on the club and what it's like.

"As a player, I just try to do my job for the team and finish any opportunities that come my way."

Castleford head coach Daryl Powell said: "Sosaia is a player who has been performing at the top level for a number of years in the NRL.

"He is big, strong and aggressive with the ball and an experienced defender. Our back line for next season has a real look of ability about it with strong competition for places in all positions and Sosaia adds hugely to our quality."