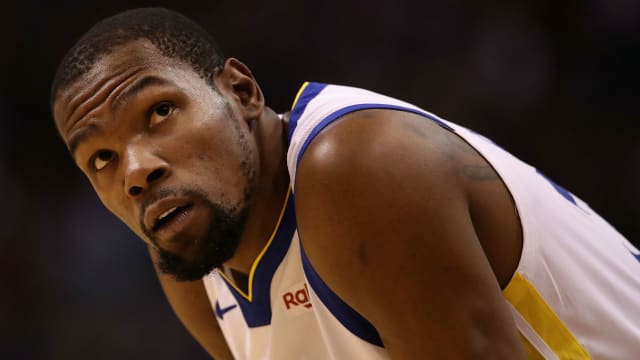 The Golden State Warriors have effectively retired the number 35 after Kevin Durant announced he was leaving to join the Brooklyn Nets.

Durant has reportedly signed a max deal as part of a sign-and-trade agreement that will see All-Star guard D'Angelo Russell head in the other direction, while the Nets are also expected to land Kyrie Irving from the Boston Celtics.

In a statement released on Monday, Warriors co-chairman and CEO Joe Lacob paid tribute to Durant and revealed no other Golden State player will wear his jersey number during his tenure.

"Three years ago, we were thrilled with the arrival of Kevin Durant, a transformative player and one of the best to ever play the game," Lacob said.

"He provided our fans and franchise with numerous highlights during his stay here … and carried himself with class and dignity both on and off the court.

"Today, as he starts a new chapter in his incredible career, we thank KD for all of his contributions, for being an integral part to one of the most prolific runs in NBA history and wish him well as he continues his Hall of Fame journey.

"As long as I am co-chairman of this team, no player will ever wear No. 35 for the Warriors again."

Durant averaged 26 points, 6.4 rebounds and 5.9 assists for Golden State last season before he ruptured his Achilles in Game 5 of the Finals, which ended in defeat to the Toronto Raptors.

The 10-time All-Star, who is expected to miss the entirety of next season, won two championships and was named Finals MVP twice during his time with the Warriors.

Brooklyn are also reportedly set to secure the signings of DeAndre Jordan and Garrett Temple ahead of 2019-20.