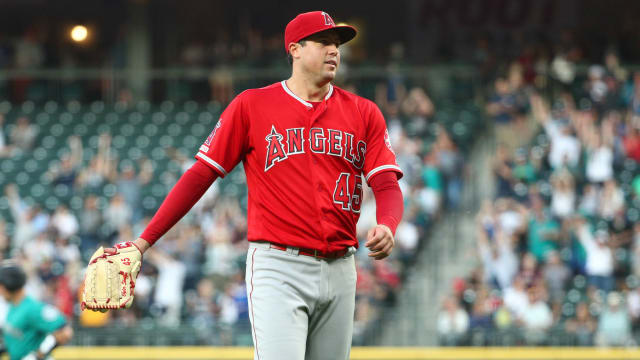 Los Angeles made the tragic announcement of Skaggs' death earlier in the day.

We are deeply saddened by the tragic news that Tyler Skaggs, 27, passed away this morning. https://t.co/q150hyH01Jpic.twitter.com/y1X5ctlWDl

It is with heavy hearts that the Phillies join the entire baseball community in offering our condolences to Tyler Skaggs’ family and the @Angels organization. Such a profound, sad loss. https://t.co/wCL110TCmI

Our hearts break for the entire @Angels organization—and the family and loved ones of Tyler Skaggs.

We send our deepest condolences. You're in our thoughts. pic.twitter.com/FCYrThYWS3

The Los Angeles Dodgers are deeply saddened to hear about the passing of Angels pitcher Tyler Skaggs. Our thoughts are with Skaggs’ family, friends and the @Angels organization.

The entire Oakland A’s organization is deeply saddened by the passing of Tyler Skaggs. We appreciated his determination and demeanor on the field and will miss him as a competitor and friend. Our condolences to Tyler’s family and the Angels organization.

We came up together. We won together. We laughed and celebrated together. Today, we all lose and mourn together. Your memory, your love for life, everything that made you, you, will live forever in the hearts and minds of those who knew you. Rest In Peace brother. We love you. pic.twitter.com/n30eXspS4N

Sad to hear that another one of our brothers has left us. RIP Tyler Skaggs. Gone too soon. pic.twitter.com/Zrb68VPdqf

I am heartbroken to learn the news of the passing of teammate Tyler Skaggs. Praying for his family to find peace in such a hard moment. Sad moment for baseball.

I am devastated about the passing of my close friend @TylerSkaggs37... what a great kid and ultimate competitor. He always wanted to get better and it was awesome being apart of his development! My heart is w his wife Carli and his mom Debbie

Devasted to hear this news. The world lost one of the best there is. My prayers go out to Tyler's family, friends, and all my guys on the @angels during this incredibly difficult time pic.twitter.com/sqyWGyAXxf

Skaggs grew up in the LA area and was selected by the Angels out of Santa Monica High School with the 40th overall pick in the 2009 MLB Draft. He was traded to the Diamondbacks in 2010 and made his major league debut with Arizona two years later.

The Angels reacquired Skaggs in December 2013 as part of a three-team trade involving the Diamondbacks and Chicago White Sox.

The Angels were to open a three-game series at the Texas Rangers on Monday but the game was called off and will be made up at a later date.