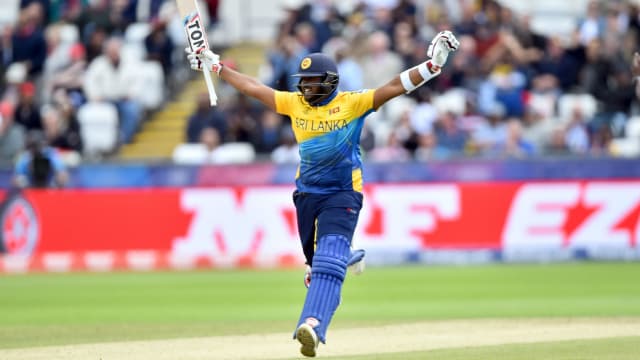 The Windies, watched from the stands by pop star Rihanna, initially slumped to 84-4 but Nicholas Pooran's 118 led a fine fightback until his pivotal 48th-over dismissal to Mathews' first ball since December 2017.

Despite at one stage threatening to pull off a record World Cup run chase, Monday's 23-run loss leaves the Windies with six defeats from their eight matches at the tournament, with only Afghanistan faring worse.

And he's done it! Run-a-ball for Avishka Fernando and the first for Sri Lanka this World Cup!

Dimuth Karunaratne (32) and Kusal's opening stand of 93 set the tone for Sri Lanka, the former scoring steadily before being caught behind.

The loss of Kusal was somewhat more perplexing as he went for a second run that simply was not there and paid the price.

But Fernando enjoyed the company of Kusal Mendis (39) for a useful 85-run partnership that took Sri Lanka close to the 200 mark.

It needed a stunning caught-and-bowled effort from Fabian Allen to account for Mendis, but Thirimanne and Mathews (26) made contributions further down the order to set the Windies a tough chase.

And they did not get off to a good start, with Sunil Ambris caught behind in the third over and Shai Hope chopping onto his stumps in the fifth.

When Jeffrey Vandersay kept his cool to pluck the ball from the air and dismiss the dangerous Chris Gayle after he had just crunched Kasun Rajitha for six, the writing seemed to be on the wall.

Shimron Hetmyer was farcically run out soon after, but Pooran's eye-catching display and Allen's swashbuckling 51 threatened a stunning revival which was only halted by the latter's run out and the former's ugly attempted slog at a Mathews delivery that angled away from him.

That stopped the Windies firmly in their tracks as Sri Lanka bounced back from their nine-wicket thrashing at the hands of South Africa.

Sri Lanka had not managed to produce a century in any of their previous group-stage outings, but Fernando put that right with a fluent knock.

His 104 came from 103 deliveries and included two maximums, setting up Sri Lanka's highest total of the tournament.

The 21-year-old celebrated joyously and was backed by an appreciative crowd in Durham as he became the third youngest player to make a World Cup century.

As the Windies' seemingly impossible task became increasingly more achievable, it was Pooran whose shoulders were burdened with the growing weight of expectation.

He was largely untroubled by it for the most part, flashing 11 fours and four sixes to leave the Sri Lanka bowling attack scratching their heads.

It needed the opportune intervention of Mathews, sidelined long-term from bowling by fitness issues, to halt his apparent victory march as he wildly slashed to the gleeful Kusal behind the stumps.

Angelo Mathews bowls for the FIRST TIME since December 2017, gets a vital wicket! Pooran departs after a heroic 118  #SLvWI | #LionsRoarpic.twitter.com/Us0Q848l9s