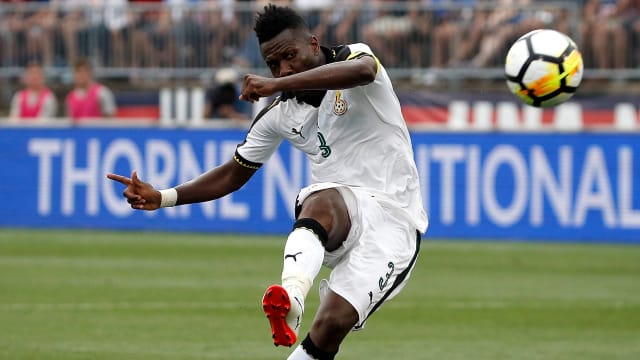 Ghana boss Kwesi Appiah could recall Asamoah Gyan to the starting line-up when they face Guinea-Bissau in a crucial Group F clash at the Africa Cup of Nations.

Draws in their opening two games have left the Black Stars facing a fight to reach the last 16 ahead of Tuesday's showdown at Suez Stadium, with only a win enough to guarantee their spot in the next round.

Gyan came on in the 78th minute of the dour 0-0 draw with Cameroon last time out for his first appearance in the 2019 finals, in a game in which Ghana managed 15 shots but only one on target.

The 33-year-old, his country's record goalscorer, has insisted he is fit enough to start but concedes the final decision is down to Appiah.

While he does not plan to make significant changes to the line-up, Appiah has suggested he could turn to Gyan as he aims to steer the four-time champions into the knockouts.

"I don't think we're going to have a lot of changes," Appiah said on Monday.

"No one has believed in Gyan more than [I have]. We've been having training sessions. Every coach assesses how training goes and chooses players for a particular game.

"It depends on how he [Gyan] performs at training, then I will decide whether he plays or not."

Kasim Adams is suspended for the match but John Boye is back from a ban. However, there are worries over the fitness of Christian Atsu, Andre Ayew, Thomas Agyepong and Jonathan Mensah.

Guinea-Bissau lost to group leaders Cameroon and were held to a goalless draw by Benin but could still qualify with a victory - something they have never managed at the finals before.

The Black Stars have left their team hotel in Ismailia to Suez where they will play their last group stage match against Guinea Bissau #TOTALAFCON2019#BLACKSTARSpic.twitter.com/ZLPVLpJnpk

No Guinea-Bissau player made more tackles (six), interceptions (four) or won back possession more often (12 times) against Benin than Bura. He is likely to be pivotal in keeping Ghana's attacking options limited.

He was arguably Ghana's best attacking player against Cameroon in a little over three minutes on the pitch. The 22-year-old could be the key to a much-needed win if Gyan is kept on the bench again.