'Confident' Mathews our man of the moment – Karunaratne 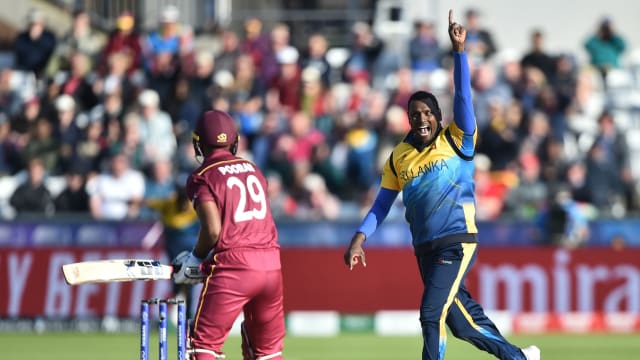 Angelo Mathews put his body on the line at The Riverside to turn the tide in Sri Lanka's thrilling Cricket World Cup win over West Indies, earning warm praise from captain Dimuth Karunaratne.

Having reduced the Windies to 84-4 in defence of their 338-6 in a dead rubber in Durham, Sri Lanka were given a major scare by Nicholas Pooran's defiant century.

His apparent one-man victory march was not halted until the 48th over, when Mathews bowled his first ball in ODIs since December 2017 and had Pooran caught behind.

With fitness concerns having kept him from bowling, it was a timely and heroic intervention from Mathews that did not go unnoticed by Karunaratne.

"Angelo put his hands up and said, 'okay I will bowl two overs'. He has that confidence. He did the job," said the Sri Lanka skipper after his side's 23-run triumph.

"I don't think he is going to bowl much more but if it is a crucial time he might bowl a couple of overs."

Avishka Fernando's maiden ODI century had laid the platform for Sri Lanka, whose exit from the competition was confirmed when hosts England beat India on Sunday.

Despite his side failing to reach the semi-finals, Karunaratne did not have a hard time finding the positives after Monday's result.

"To win any match is a great feeling," he said. "It gives us lots of confidence. All of the players are doing really well. That is what I was expecting as a captain."

In contrast, opposite number Jason Holder was left to reflect on a miserable campaign for the Windies, who have not tasted victory since thrashing Pakistan in their group-stage opener back in May.

This was their sixth defeat in eight outings, with only Afghanistan – who they face in their final game – faring worse.

"We have just got to be better," said Holder. "We've let some key moments slip in this World Cup.

"I thought their score was on par. Fernando batted well – showed us things get easier if you stay in. Pooran was excellent too.

"I thought we finished our bowling well, but our fielding let us down. We just want to play the perfect game next time."