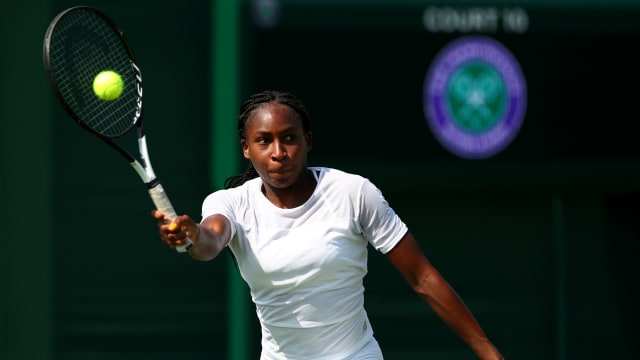 Venus Williams will tackle record-breaking teenager Cori Gauff on Court One in an all-American battle of the generations at Wimbledon on Monday.

Five-time former SW19 champion Williams, 39, was drawn on Friday to face the youngest player to ever come through the women's singles qualifying rounds.

Gauff has cited Venus and sister Serena as inspirations behind her career, and the Florida-based 15-year-old has enjoyed success in junior grand slams.

The biggest test of her fledgling career is also rated by many as the most eagerly anticipated match of the opening day at the championships, however it misses out on Centre Court billing.

But a slot third on the second largest court means, with a likely late-afternoon start in London, it should attract a strong television audience both in the UK and the United States.

Novak Djokovic, as the defending men's champion, is handed the customary honour of getting action under way on Centre Court when he faces German veteran Philipp Kohlschreiber.

Play starts at 11:00 local time on all courts other than Centre and Court One, where action begins two hours later.

Last year's men's runner-up, Kevin Anderson of South Africa, starts out on Court Three when he plays France's Pierre-Hugues Herbert, the man who will partner Andy Murray in doubles later in the week.

Heather Watson, Britain's only other singles player in action on Monday, gets proceedings going on Court 12 when she plays 17-year-old American Caty McNally.

McNally has lost in each of the last three Wimbledon girls' doubles finals but won the 2018 US Open junior title in tandem with Gauff.