McKay stars on debut to lead Rays past Rangers 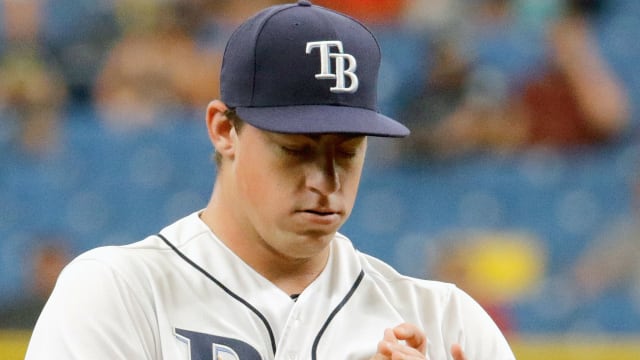 Brendan McKay made an impressive MLB debut for the Tampa Bay Rays on Saturday.

He nearly had a perfect outing before surrendering a hit in his sixth and final inning. The fourth overall selection in the 2017 draft showed just why the Rays sought him out.

The lefty allowed the one hit, a walk and struck out three in the Rays' eventual 5-2 win over the Texas Rangers.

"It was fun to watch,'' Rays manager Kevin Cash said, via ESPN. "Certainly set a pretty high bar for himself. Just the way he carried himself, it was kind of unflappable.''

The Rays took an early lead with three runs in the second inning and then added two more in the seventh.

The Rangers were held scoreless until the final two frames where they brought in their only two runs – on a wild pitch and a ground out.

Travis d'Arnaud led Tampa Bay's offensive efforts, going two for three at the plate with one RBI. Avisail Garcia, Willy Adames and Joey Wendle all pitched in RBIs as well.

Renato Nunez led the way for the Baltimore Orioles, who became the first team in MLB history to have back-to-back shutouts and win by 13 or more runs in each game. Nunez was two for three at the plate with two home runs and four RBIs. Andrew Cashner also threw seven innings of three-hit ball to help Baltimore beat the Cleveland Indians 13-0.

Danny Jansen had yet to hit a home run in his own ballpark but he finally came through in a big way. The catcher hit the game-winning homer in the bottom of the ninth at the Rogers Centre to lift the Toronto Blue Jays past the Kansas City Royals 7-5.

It was a hitter's day as the bats continued to fly around the league, even for the struggling Tigers. Miguel Cabrera had three hits and three RBIs to help snap Detroit's eight-game losing skid with a 7-5 win over the Washington Nationals.

Seth Lugo had a rough 1.2 innings against the Atlanta Braves. The New York Mets righty allowed back-to-back home runs in the team's 5-4 loss. He ended up getting pulled in favour of Brooks Pounders but was ultimately tagged with the loss – his second of the season.

It seems like the hot hitting skipped the White Sox. Chicago needed some offense against the Minnesota Twins but did not get it from James McCann and Zack Collins, who both finished 0 for four in their 10-3 loss.

The Chicago Cubs and Cincinnati Reds ran onto the diamond after Yasiel Puig was hit by a pitch and madness ensued.

It was hard to pick just one of the six total home runs hit in the London Series that pitted famed rivals together, but a two-run dinger by Aaron Judge was a worthy highlight. The New York Yankees went on to beat the Boston Red Sox 17-13.