Knicks 'upbeat and confident' despite missing out on Durant, Irving 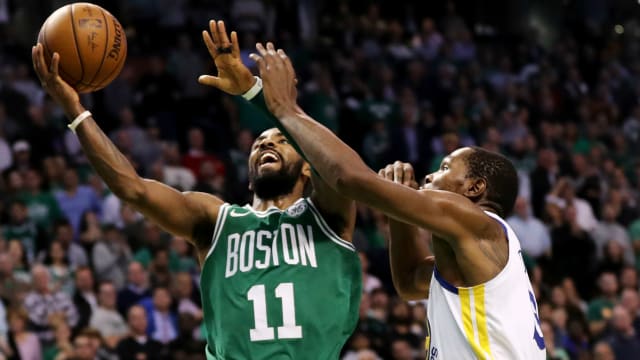 The New York Knicks claim they are not worried despite missing out on Kevin Durant and Kyrie Irving.

New York have cap space to sign multiple top-level players but appear like they will not land a star this offseason after Durant and Irving reportedly agreed to max contracts with the Brooklyn Nets on Sunday.

Knicks president Steve Mills addressed the team missing out on the pair in a statement.

"While we understand that some Knicks fans could be disappointed with tonight's news, we continue to be upbeat and confident in our plans to rebuild the Knicks to compete for championships in the future, through both the draft and targeted free agents," Mill said in a statement, via SNY.

The Knicks were not willing to offer Durant a max contract because of concerns over his ruptured Achilles, according to an earlier report from ESPN, which cites unidentified league sources. He suffered the injury in Game 5 of the NBA Finals while playing with the Golden State Warriors and is expected to miss most, if not all, of 2019-20.

"Our plan wasn't to create $70m in room to go after free agents this summer," Mills told the Undefeated earlier this week. "Our plan was to organically build this team through teamwork, drafting well, getting high-character guys that want to compete. The [salary cap] space was a byproduct of that. If the right guys are there for us, great, because we still have all the young pieces and draft picks to move forward.

"And if they're not, we're going to keep building our plan, drafting our guys, playing well and potentially being trade partners. We feel really good about where we are going."

The Knicks finished 2018-19 with a 17-65 record and missed the playoffs for a sixth straight season.

They selected former Duke star RJ Barrett with the third pick in the 2019 draft.