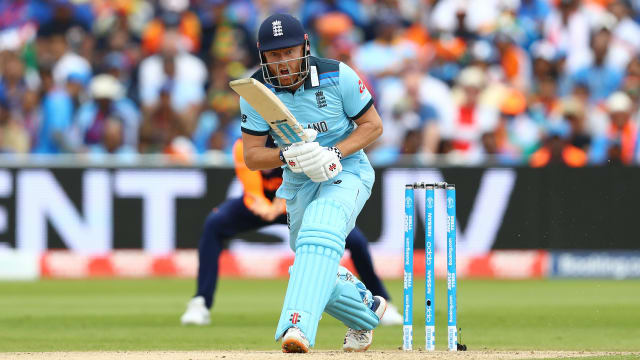 A tumultuous week for opener Bairstow (111) in which he found himself at the centre of a spat with ex-captain Michael Vaughan ended with a maiden World Cup hundred as England posted 337-7.

Bairstow whacked six maximums and 10 fours in a fine 109-ball knock before slashing the excellent Mohammed Shami to deep point.

The fit-again Jason Roy was aggressive at the top of the order with his 66 – ended only by a stunning catch on the run from sub fielder Ravindra Jadeja – helping England open with a 160-run stand, the highest made against India at a World Cup.

Ben Stokes added an excellent 79 – his third straight half-century – with three sixes and six fours to boost England, but Shami's wonderful 5-69 on a batsman friendly pitch in Birmingham kept the score from running into the 400s.

Rohit Sharma was put down on four at slip by Joe Root and made England pay with this third century of the tournament, while Kohli made 66 in an excellent century stand.

But Chris Woakes (2-58) and Liam Plunkett (3-55) displayed their worth to England with star turns with the ball, as India – who are still all but assured of a last-four place – paid the price for sedate scoring at the start of their reply.

England return to fourth in the table and know victory over New Zealand at The Riverside on Wednesday will clinch a semi-final spot.

India's unbeaten run at #CWC19 comes to an end!

England win by 31 runs to move back into fourth and give their semi-final hopes a huge boost.

How good is this tournament?!#ENGvINDpic.twitter.com/YuqHjNoxlh

THAT'S THE WAY TO DO IT, JONNY

Bairstow's comments this week saying people were waiting for England to fail led Vaughan slamming his mindset as "negative and pathetic".

But Vaughan tweeted to say "that's the way to do it" after Bairstow anchored England's innings and he celebrated his century with an understated raise of the bat and thumbs up to the camera.

Roy, who missed the last three games due to a hamstring injury, also showed what Eoin Morgan's men have been missing at the top of the order, although India should have reviewed when he gloved behind on 21.

Shami stemmed England's momentum in the middle of their innings, adding Morgan, Root, Jos Buttler and Woakes to his list of victims after snaring Bairstow.

Rohit made the most of Root's gaffe with some crisp batting, finding the boundary 15 times from 109 deliveries.

But the superb Woakes – who had earlier caught and bowled KL Rahul – tempted Rohit to edge one behind after Kohli's knock was ended by Plunkett.

Woakes then took a wonderful catch on the run at the square-leg boundary to see off the big-hitting Rishabh Pant (32) off Plunkett, who also claimed the scalp of the dangerous-looking Hardik Pandya (45).