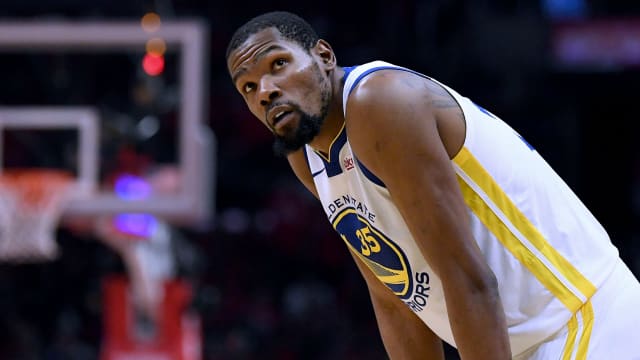 Kevin Durant is heading to the Brooklyn Nets, he announced on Sunday.

The 30-year-old star will sign a four-year, max deal with the Nets, it was confirmed via his company The Boardroom.

Durant ruptured his Achilles in Game 5 of the NBA Finals with the Golden State Warriors and is expected to miss all of next season.

Fellow star Kyrie Irving, Durant's close friend, will reportedly agree to a contract with the Nets on Sunday.

The 10-time All-Star won two championships and was named Finals MVP twice during his time with the Warriors.

"What more could we ask for from him [Durant]? He's been everything to us," Warriors general manager Bob Myers told reporters in mid-June, via The Mercury News.

"The guy has been everything we could have ever dreamed. Been an awesome member of this organisation. There's so much stuff he does in the community that probably doesn't get as many headlines.

"The things he's done in D.C., his foundation. How he kind of lives his life. Like I said, we're lucky to have been around him."

Durant won the MVP in 2013-14 while with the Oklahoma City Thunder. He had also been linked to the Los Angeles Clippers, New York Knicks and a return to the Warriors.

The Nets will also reportedly ink center DeAndre Jordan – another close friend of Durant's – to a deal, and agreed to a two-year, $10million contract with Garrett Temple, according to ESPN.