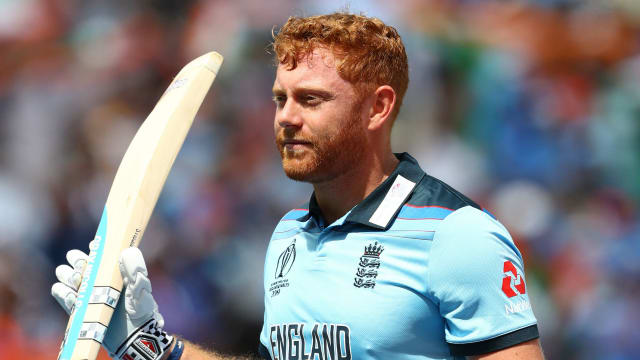 Criticised for having a "negative, pathetic mindset" by former captain Michael Vaughan after his claims people had been waiting for England to fail, Bairstow responded in magnificent fashion as the tournament hosts posted 337-7 on Sunday.

Bairstow clubbed 10 fours and six sixes for his 111 before falling to Mohammed Shami, having put on 160 for the first wicket alongside the returning Jason Roy, who was fortunate when India opted not to review when he had gloved behind and went on to make a lively 66 from 57 balls.

India responded well after that opening salvo and, led by Shami's 5-69, prevented England from threatening 400 on a good batting pitch, though Ben Stokes (79 off 54) ensured their target was an imposing one.

And, with Australia's successful chase of 278 in 1993 against England still representing the highest at this ground, the hosts will have high hopes of ensuring India do not deal their semi-final hopes a potentially fatal blow.

England finish on 337/7 against India at Edgbaston!

Jonny Bairstow and Jason Roy gave them a blistering start before Mohammed Shami's five-for pegged them back.

But Ben Stokes' 79 has ensured the hosts finish strong.