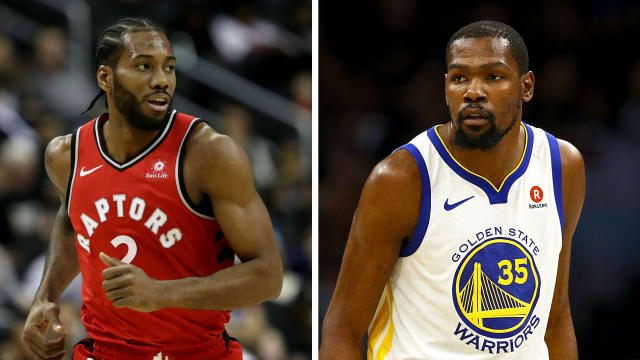 Kevin Durant and Kawhi Leonard have been discussing potential scenarios that could put them on the same team next season, it has been reported.

Ten-time NBA All-Star Durant and reigning Finals MVP Leonard are expected to be the most sought-after talents in free agency – which starts on Sunday – and have spoken about potentially teaming up, according to ESPN.

The outlet also claimed the two teams that could sign them are the Los Angeles Clippers and New York Knicks.

The Athletic also reported the Clippers believe offering the chance to play alongside Leonard is how they will be able to secure Durant, despite competition from the Brooklyn Nets.

Durant declined his $31.5million option with the Golden State Warriors to become an unrestricted free agent. It has been rumoured he will sign with a different team in free agency, but his long-term future became complicated when he ruptured his Achilles during the Finals defeat to Leonard's Toronto Raptors.

The 30-year-old had surgery, but Warriors coach Steve Kerr said it was likely he will sit out the entirety of next season.

At one point, the Nets were considered frontrunners to land Durant, but it was reported on Friday they were no longer the favourites.

The Knicks are understood to think they have a good chance to sign Durant, but team owner James Dolan reportedly urged team executives to use "caution" regarding the 2014 MVP's injury and wants to see test results and a projected prognosis before committing to a deal.

Leonard, on the other hand, opted out of the final year of his contract with the Raptors. He reportedly is set to meet with teams around the NBA and has been linked to the Nets and Los Angeles Lakers, though it has been suggested he could stay at Toronto after winning the NBA championship.