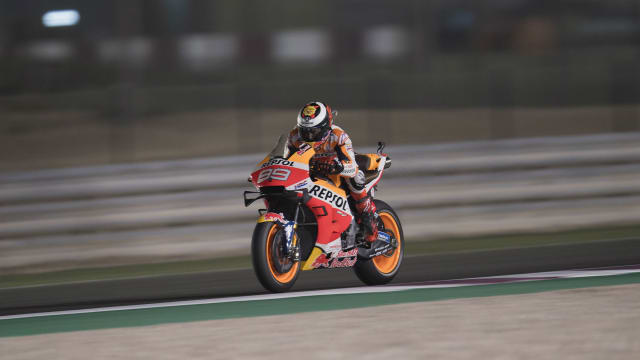 Jorge Lorenzo crashed again in practice at the Dutch TT on Friday and is set for scans on his chest and spine.

The Repsol Honda rider has dominated the headlines in MotoGP in recent weeks with a series of incidents, notably taking out Andrea Dovizioso, Valentino Rossi and Maverick Vinales when sliding out of the Catalunya Grand Prix.

Lorenzo then crashed at a post-race test and, arriving in the Netherlands this week, admitted to feeling "still a little bit sore".

Those existing injuries were aggravated on Friday in FP1 when Lorenzo came flying off his bike at high speed at Turn 7.

The Spaniard was soon feeling better, but doctor Angel Charte confirmed further examinations: "Jorge is now fine. He has had a high-energy crash, he has fallen very badly.

"When he got here, he was stunned, slightly disoriented and certainly very unstable. We have made the relevant checks, including the normal radiology, but I'm not fully satisfied.

"So, we decided, even though there is no brain injury, to do an MRI scan of the spine and a CT scan from the thorax to the abdomen.

"The greatest concern is the pain that he says is the most intense in the torso-lumbar area. It is an area already punished by the crash in Catalonia."

Fellow MotoGP rider Jack Miller told Lorenzo to "calm down" after the headline-stealing crash in Barcelona, describing the Spaniard as "out of control" on warm-up laps this season.

Vinales, who was involved in the collision, had described three-time champion Lorenzo's error as a "rookie mistake".

Fabio Quartararo went fastest ahead of Vinales in FP1 at the Dutch TT.