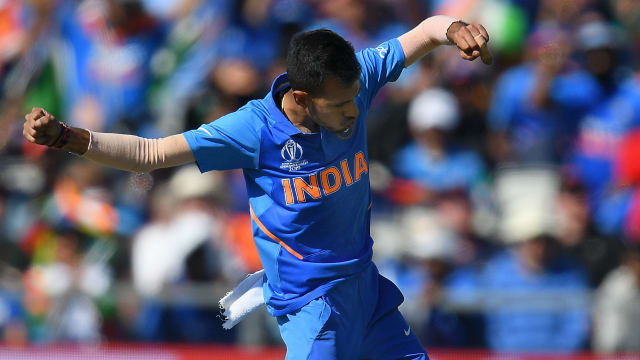 India's bowlers ripped through West Indies to seal a 125-run win at Old Trafford that all but confirms a Cricket World Cup semi-final spot for Virat Kohli's unbeaten side.

West Indies lost Chris Gayle when they had just 10 on the board and wickets fell at regular intervals after Sunil Ambris, who top-scored with 31 having been drafted in for his first appearance of the tournament, was out to leave his team 71-3.

Shami (4-16) was the pick of the India attack once again as West Indies were dismissed for 143 to see their slim semi-final aspirations ended.

India next face England at Edgbaston on Sunday and one victory from their remaining three fixtures will ensure they make the last four.

Another day, another landmark for Kohli.

Having beaten Sachin Tendulkar's record to become the quickest man to reach 11,000 ODI runs in the win over Pakistan at the same venue, Kohli made history again at Old Trafford, reaching 20,000 international runs in all formats quicker than anyone else.

Kohli did that with his 37th run in his 417th inning, going on to make his fourth successive half-century in this World Cup before pulling a half-tracker from Holder to Darren Bravo at midwicket.

That left India 180-5 in the 39th over and though Dhoni initially struggled and should have been stumped when on seven, he picked up the pace towards the end, reaching his 50 in the final over and then smashing the last ball for his second maximum to set West Indies 269 to win.

Mt. 20k scaled! @imVkohli becomes the quickest batsman to make 20,000 international runs. He is the third Indian after @sachin_rt and Rahul Dravid to achieve this feat. #TeamIndia#CWC19#KingKohlipic.twitter.com/s8mn9sgaap

A day after he had hinted at shelving his retirement plans, Gayle produced an innings that suggested he should stick with his initial idea to hang up his batting gloves.

The self-proclaimed 'Universe Boss' had said he was "definitely up there with the greats, without a doubt" at his pre-match press conference, though he looked anything but when meekly pulling Shami to Kedar Jadhav at mid on to exit after 19 balls.

Four of Gayle's six runs came from an inside edge where he was fortunate not to play on and his struggles epitomised West Indies' woes, with only five batsmen reaching double figures, two of which were tailenders Kemar Roach (14 not out) and Sheldon Cottrell (10).

It was a disappointing end for a team that had promised so much when hammering Pakistan in their opening game.

That kind of day for the #MenInMaroon so far... pic.twitter.com/EXljjxHyyB