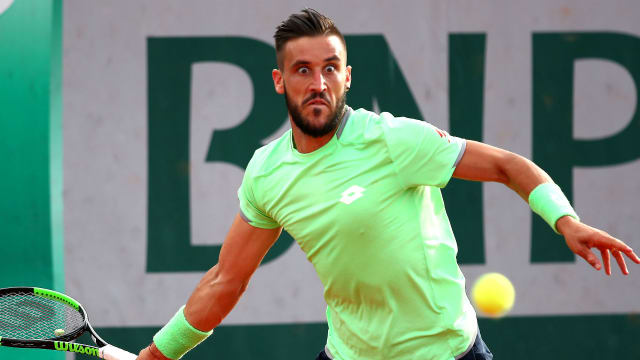 Damir Dzumhur's defence of the Antalya Open title is over after he was forced to retire from his quarter-final against Jordan Thompson with a stomach complaint.

The Bosnian was 7-5 1-0 down when he was forced to withdraw, meaning third seed Thompson advanced to a last-four meeting with Miomir Kecmanovic, who booked his maiden ATP Tour semi-final spot by ousting Serbian compatriot Viktor Troicki 6-3 6-4.

Last year's final saw Dzumhur defeat Adrian Mannarino, who was also runner-up to Yuichi Sugita in 2017, but there will be no third straight appearance in the decider for the second-seeded Frenchman after he lost out 3-6 7-6 (7-3) 6-3 to Lorenzo Sonego.

Victory sets up a first Tour semi-final for Sonego, who will next face Pablo Carreno Busta after he overcame Bernard Tomic in three sets.

At the Nature Valley International, Kyle Edmund put a nightmare first set behind him to win an all-British tie against Dan Evans 1-6 6-3 6-4.

Taylor Fritz, who will meet Edmund in the semi-finals, advanced in straight sets, as did his American compatriot Sam Querrey.

Querrey ousted Fernando Verdasco to set up a last-four date with Thomas Fabbiano after his 6-4 6-3 beating of Gilles Simon.