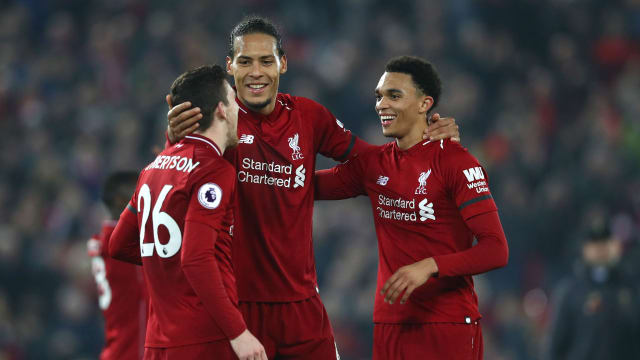 Liverpool enjoyed a superb season in 2018-19, pushing Manchester City all the way in the Premier League before triumphing in the Champions League.

As a result, the values of their squad members soared, and four of the Reds' team are included in this most valuable XI, put together by Football Benchmark.

Lionel Messi was in top form for Barcelona throughout the campaign, while Paris Saint-Germain duo Kylian Mbappe and Neymar complete a fearsome front three, though that means there is no place for Juventus' Cristiano Ronaldo.

But, who else features in the team? Read on to find out.

Champions League winners @LFC boast the most players (4) in the imaginary top XI, while reigning World Cup champions France is the most represented nationality with 4 players pic.twitter.com/7i7ShJjxjz

Eyebrows may have been raised when Liverpool paid Roma a reported £56million – at the time a record fee for a goalkeeper – to secure Alisson's services, but the Brazil shot-stopper cast any doubts over the move aside with a marvellous first season on Merseyside.

Alisson appeared in every Premier League game, conceding a league-low 22 goals as the Reds finished a close second behind Manchester City, while also playing a starring role in their Champions League triumph.

The second Liverpool player to feature is right-back Trent Alexander-Arnold, who enjoyed another stellar campaign.

While solid defensively, Alexander-Arnold really came into his own going forward, amassing 16 assists across 40 appearances in all competitions, taking his value up to €81m.

Undoubtedly one of the performers of the season, PFA Players' Player of the Year Virgil van Dijk was in extraordinary form for Liverpool last campaign, with the Reds paying a reported £75million for his signing in January 2018.

Van Dijk was a towering presence in Liverpool's defence, and also scored six goals as his value soared by an additional €30m. The former Celtic and Southampton star also led Netherlands to the Nations League final, where they lost out to Portugal.

Fresh from helping France to a World Cup triumph, Raphael Varane did not manage to replicate his international form for Real Madrid, who endured a hugely difficult season by their standards.

Varane still put in some accomplished displays at the heart of their defence, and despite Madrid's struggles, he is still the second-highest valued centre-back in world football.

A fourth and final Liverpool player in this side is Andy Robertson, who like his opposite full-back Alexander-Arnold was in magnificent form for Jurgen Klopp's side all season.

Attacking has always been a strength of Robertson's, and though he is dogged defensively, it was no surprise to see him have such an impact higher up the field, with the Scotland left-back providing 13 assists from his 48 appearances across all competitions.

Paul Pogba may well have come under criticism for his performances at Manchester United, while doubt remains over his future at Old Trafford, but that has not stopped his value staying way up above €100m.

The France star scored 16 goals and provided 11 assists in all competitions for his club last season, with Juventus and Real Madrid reportedly battling it out to sign the 26-year-old.

Maurizio Sarri decided to use N'Golo Kante in a more advanced role during his time at Chelsea last season, and it is safe to say that switch was not always a success – it is easy to feel that one of the best, if not the best, defensive midfielders in the world had been wasted playing further forward.

Nevertheless, Kante is valued as the third most expensive midfielder, and kept up his run of winning a title in every campaign during his time in England as he helped Chelsea to a Europa League triumph.

Manchester City's midfield maestro had a season derailed by injuries in 2018-19, yet still featured enough to play a key role in each of Pep Guardiola's side's domestic triumphs.

De Bruyne scored six goals and added 10 assists from 32 appearances in all competitions, and turned in a scintillating performance in City's thrashing of Watford in the FA Cup final.

60 - Since his return to the club in 2016, Paul Pogba has been involved in more goals in all competitions than any other Manchester United player (31 goals, 29 assists). Challenge. pic.twitter.com/8Cq5zd7Sf8

Messi seems to just keep getting better. Barca's mercurial forward – who turned 32 on Monday – scored a remarkable 51 times for Barcelona last term, surpassing the landmark of 600 club goals, a milestone he reached with a sensational free-kick against Liverpool at Camp Nou.

However, Messi cannot carry an entire team all of the time, and though Barca did retain their LaLiga title, they crashed out of the Champions League at Anfield, before then losing to Valencia in the Copa del Rey final – a match in which Messi scored.

The most valuable player in this side, Mbappe's rise continues at pace. After playing a pivotal role in France's World Cup glory, Mbappe scored 39 goals in total for Paris Saint-Germain in 2018-19, and recently netted his 100th career goal in France's win over Andorra in Euro 2020 qualifying.

At 20, Mbappe's value is way above €200m, and is surely only going to keep rising if the forward continues his sensational form.

Rumours persist over Neymar's future at Paris Saint-Germain, with the Brazil star – who has suffered a batch of injuries at crucial points in both of his seasons in France – having failed to live up to expectations since his £200m switch in 2017.

But while PSG have not been led to Champions League glory by Neymar, his value is the second highest in this side, behind his club team-mate Mbappe.

Best Of @KMbappe: "When I score, I want to score a second, a third, a fourth... I always want more!"