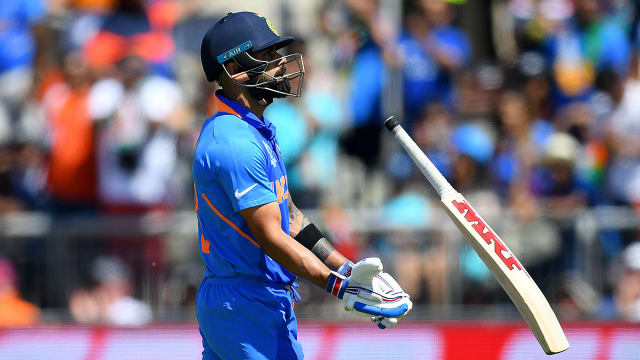 India's 125-run win all but confirmed a Cricket World Cup semi-final spot for Kohli's unbeaten side and ended West Indies' hopes of reaching the last four.

Captain Kohli was man of the match after a gritty 72 and Dhoni made useful runs. The wicketkeeper-batsman's unbeaten 56 contained two sixes in the final over of India's innings, while Hardik Pandya also scored 46.

The Caribbean side then folded with the bat, following India's 268-7 with a feeble 143 all out.

Another game, another Player of the Match award for #ViratKohli#WIvIND | #TeamIndia | #CWC19pic.twitter.com/m6TQkiOTQC

Kohli said: "We've just become number one as far as the rankings are concerned and, to be honest, we've been playing like that for a while now. I think the key is to continue the same way.

"Things haven't gone our way with the bat in the last two games but we've still found a way to win. That to me is a very pleasing thing and I'm happy I could contribute as well.

"Today, getting to 270 was crucial. I think Hardik played outstandingly well and MS finished very strongly.

"When those two play like that we always get to a winning total and on that kind of wicket 270 was always going to be a very, very difficult score to chase."

Speaking about Dhoni, Kohli said: "He knows what he wants to do out in the middle. He's won us so many games and the best thing about having someone like him is when you need that extra 15, 20 runs he knows exactly how to get them for the team.

"Keeping strike at the end and finishing off with two big sixes was something that gave us a lot of boosts as a team.

"His experience eight out of 10 times has come good for us. He's a legend of the game, we all know that, and he's doing a tremendous job for us and hopefully he can continue."

An elated #ViratKohli took a grand selfie with  fans after this match-winning performance in #WIvIND  #CWC19pic.twitter.com/aIYhqUsYW8

West Indies skipper Jason Holder said: "I thought the bowlers did a fantastic job and I couldn't really ask them for more, and the guys gave a really good effort in the field. I guess we just let ourselves down with the bat."

Holder believes that was a theme reflected throughout the World Cup, as he analysed where it went wrong for West Indies.

"We let ourselves down significantly," Holder said. "I don't think we seized the crucial moments in this tournament as well as we should have.

"I thought the bowlers had a reasonable campaign and everything we asked of them they came out and delivered.

"We didn't really support as well as we'd have liked in the field, in fact we let ourselves down tremendously in the field, and some of our batting was just too inconsistent."