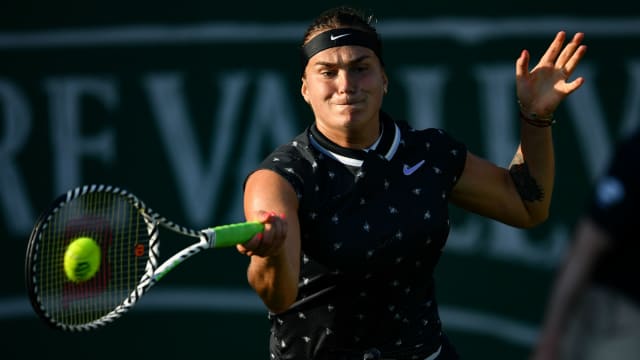 Defending champion Caroline Wozniacki was eliminated from the Nature Valley International in dramatic fashion as Aryna Sabalenka gained revenge in a rematch of the 2018 final.

Next up for the Belarusian is a meeting with Kiki Bertens, who she has not beaten in three previous meetings. Bertens was a 6-3 6-3 winner over Anna-Lena Friedsam.

"Something unbelievable happened today and I'm so happy that I won this match," said an ecstatic Sabalenka in an on-court interview. "It's a really important win for me."

In the week before Wimbledon, 2017 French Open winner Jelena Ostapenko retired from her match with Ekaterina Alexandrova due to a left hip injury, while trailing 6-3 2-1.

The pick of the quarter-final ties will be a meeting between two former world number ones in Simona Halep and Angelique Kerber. The Romanian came through a three-setter with Polona Hercog while Kerber beat Rebecca Peterson 7-6 (7-4) 6-0.

Home hope Johanna Konta suffered a surprising 6-3 6-2 loss at the hands of Ons Jabeur, who will take on Alize Cornet - a straight-sets winner over Zhang Shuai - in the last eight.