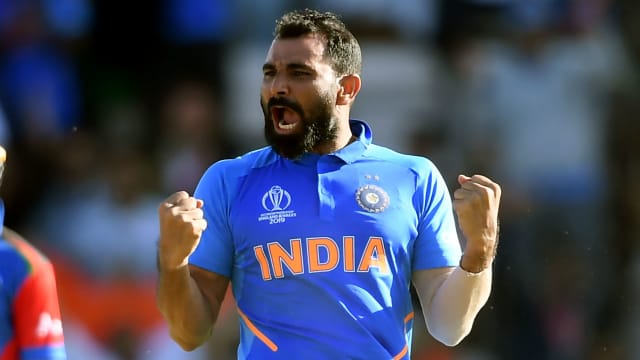 Bharat Arun says the instant impact made by Mohammed Shami in the Cricket World Cup showed India are blessed with "an embarrassment of riches" in the bowling department.

Shami took a hat-trick in the final over to earn India a dramatic 11-run win over Afghanistan in Southampton last Saturday.

The paceman took 4-40 in his first match of the tournament after coming into the side in the absence of Bhuvneshwar Kumar - sidelined with a hamstring niggle.

Shami is set to feature against West Indies at Old Trafford on Thursday, with no chances being taken over Bhuvneshwar's fitness, and India bowling coach Arun says Virat Kohli is fortunate to have so much talent to call upon.

"Bhuvneshwar's injury is not of any great concern. It is just a niggle, which we didn't want to take a chance [on]," Arun said.

"And it was also an opportunity for us to plug Shami into the games. But the fact he's done exceptionally well all goes well for us; it's an embarrassment of riches.

"And we would take a call as per the conditions, but Bhuvi has done exceptionally well, so I think it's a pretty good headache to have."

What is the reason behind @MdShami11's version 2.0? Bowling coach B Arun has the answers  #TeamIndia#INDvWI#CWC19pic.twitter.com/JO7XvychwU

Arun added that Shami deserves credit for improving his fitness, having lost his place in the team for falling short of the expected levels.

Asked about a conversation he had with Shami over his fitness, Arun replied: "It was a pretty long conversation. I can't really bring that to the table here.

"But, yes, Shami was in a totally different mindset. And we had to -  the head coach, me, all of us - had to sit down and speak to him and kind of draw a future map for him and had to convince him regarding that. And he was going through certain personal problems as well at that point in time.

"So beyond all that, I think what has really got him into the situation is his ability to play cricket and that's exactly what we made him focus on. And I think the rest is there for everybody to see."