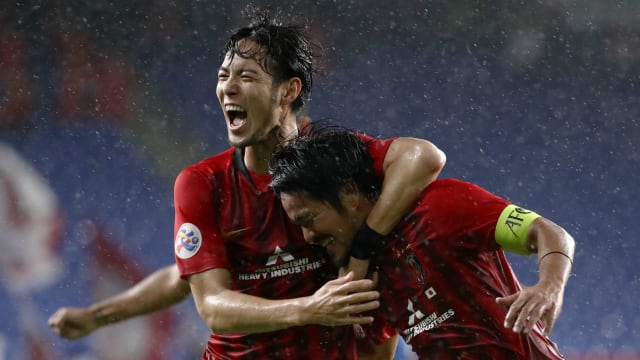 Shanghai SIPG needed penalties to clinch their place in the AFC Champions League quarter-finals, beating Jeonbuk Hyundai Motors 5-3 in a shoot-out after a 1-1 second-leg draw in South Korea.

After coming from behind to draw 1-1 in the first leg, Shanghai once again fell behind when Kim Shin-wook met Son Jun-ho's neat pass and produced a clinical first-time finish past Yan Junling to give Jeonbuk the lead after 27 minutes.

The hosts kept their noses in front until the 80th minute when Hulk levelled the tie in controversial fashion, slotting home via a deflection after Elkeson headed the ball back from the byline with some Jeonbuk players claiming it had gone out of play.

The game went into extra time where more chances were squandered and Jeonbuk's Moon Seon-min received a straight red card for retaliation in the last minute of play.

Jeonbuk striker Lee Dong-gook stepped up to take his side's first penalty only to see it saved by Yan, and there was no way back for the hosts as Shanghai guided five excellent spot-kicks home to secure their passage into the last eight.

Shanghai SIPG are through to the quarter-finals! @oscar8 making no mistakes producing the winner in the shootout! #JEOvSHA #ACL2019 pic.twitter.com/aA2hlACrLa

In the day's other tie, Urawa Red Diamonds arrived at Ulsan Hyundai trailing 2-1 from the first leg but made light work of their hosts in a straightforward 3-0 second-leg victory.

Four minutes from the end of a cagey first half, Tomoya Ugain burst down the right flank and crossed for Shinzo Koroki to place a header beyond Oh Seung-hoon at the far post.

Urawa coach Tsuyoshi Otsuki knew that a 2-2 aggregate draw would see his side crash out of the competition on away goals, and he sent them out in search of further goals after the break.

Koroki duly delivered 10 minutes from time, meeting Mauricio Antonio's curling ball with an unstoppable bullet header into the bottom corner of the net.

With three minutes left, Ryosuke Yamanaka's looping cross from the left was headed back across goal by Kenyu Sugimoto and Ewerton arrived just in time to fire home from 12 yards and wrap up a fine win for the visitors.

The diamonds are shining in Ulsan tonight. Urawa are into the quarter-finals after an extraordinary performance! #ULSvURA #ACL2019 pic.twitter.com/yhN7LgAVdy