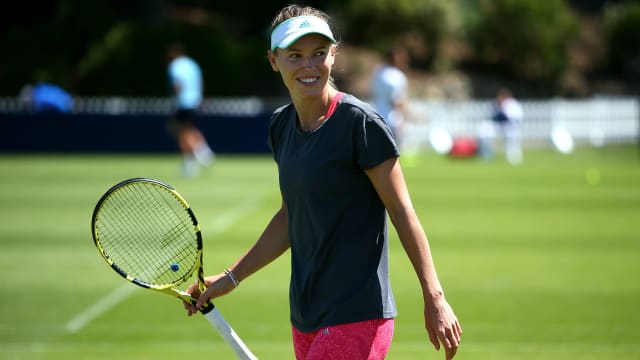 Reigning champion Caroline Wozniacki opened the defence of her title at the Nature Valley International with a 6-3 6-4 victory over Kirsten Flipkens.

Playing in her first match on grass this season, Dane Wozniacki - who also triumphed at the tournament in 2009 - unsurprisingly looked right at home at Eastbourne.

The 11th seed led 3-0 in the first set and then raced 4-0 up in the second and while Flipkens hit back on each occasion, the Belgian was eventually ousted after one hour and 22 minutes on court.

"I love playing here, it brings back great memories for me," Wozniacki told the WTA Tour's official website. "I was here for the first time when I was 14, so basically half of my life. It's pretty amazing."

“I love playing here, it brings back great memories!”@CaroWozniacki is delighted to be back on the south coast at the #NatureValleyInternational. pic.twitter.com/kvrXmmCgad

Marketa Vondrousova, the 13th seed, progressed at the expense of Zheng Saisai, though the 6-2 6-3 score did not do justice to how hard the Czech had to work for the win.

Jelena Ostapenko set up a second-round meeting with seventh seed Sloane Stephens by beating Mihaela Buzarnescu at the tournament for a second straight year.

The 2017 French Open champion, a semi-finalist at Wimbledon 12 months ago, rallied from a break down in both sets against her Romanian opponent, sealing a 91-minute victory by taking the final four games in a row.

There were also wins for Daria Gavrilova, Hsieh Su-wei, Tamara Zidansek, Yulia Putintseva and Ons Jabeur before the rain arrived, cutting short play for the day.

Meanwhile, after rising to the top of the world rankings with victory at the Birmingham Classic on Sunday, Ashleigh Barty withdrew from her final tournament before Wimbledon due to an arm injury.