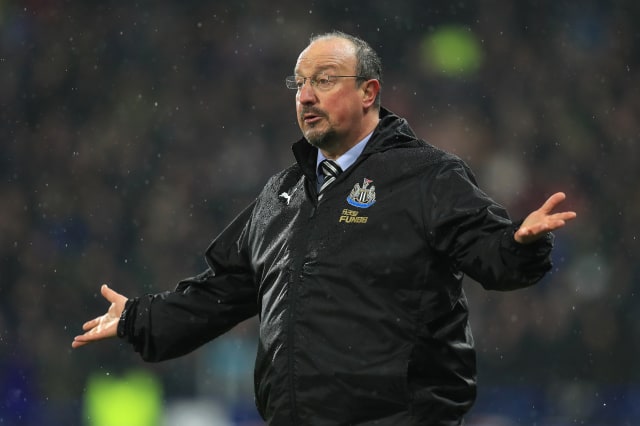 Rafael Benitez will leave Newcastle when his contract expires, the club confirmed on Monday.

The former Real Madrid and Liverpool manager has thrived on Tyneside since his appointment in 2016.

He could not help the Magpies avoid relegation from the Premier League that season, with the club already in trouble, but he earned them promotion back to the top flight at the first attempt in 2017.

His subsequent successes in keeping Newcastle in the top tier on a restricted budget had endeared him to the Geordie faithful.

But the fans' greatest fears were confirmed in a statement ahead of the final day of his contract on June 30.

The club announced in a statement: "It is with disappointment that we announce manager Rafael Benítez will leave Newcastle United upon the expiry of his contract on 30th June 2019.

"We have worked hard to extend Rafa's contract over a significant period of time, however it has not been - and will not be - possible to reach an agreement with Rafa and his representatives."

The statement continued: "We would like to thank Rafa and his coaching team for their efforts over the last three years and their significant contribution to what has been collectively achieved.

"We would also like to thank our supporters, players and staff for their patience during a period of uncertainty.

"The process to appoint a successor will now begin."

Benitez, 59, replaced Steve McClaren in March 2016 with the club facing a dire threat of relegation.

He helped them to a six-match unbeaten streak at the end of the season, but they fell just short in a bid to avoid the drop - with 12 points collected in that time.

But they finished as Championship winners the following season, pipping Brighton to the title by one point and earning automatic promotion.

Owner Mike Ashley reportedly put the club up for sale since their re-entrance to the Premier League, restricting the Magpies' budget for transfers.

It has meant that - the £20million acquisition of Miguel Almiron aside - Benitez was left working with scraps.

The talented manager led Newcastle to a tenth-placed finish in their first season back, before a 13th-placed finish last season, despite being in the relegation zone in January.

And it seemed Ashley could not convince Benitez to remain at the club any longer, with Garry Monk, Eddie Howe and Mikel Arteta leading the favourites to replace him at Betfair.

Fans of the magpies vented their frustration and disappointment on Twitter:

Desperately disappointing. That's an understatement. An absolutely massive job now to appoint a successor that can try and unite the fans like Rafa did. Honestly I'm shocked. Still believed this morning they'd somehow find a resolution this week. #nufchttps://t.co/N1gkx70fyJ

Bad, bad, bad for Newcastle as Benitez and all his coaching staff leave. Club statement says process to appoint someone new will now begin - you'd like to think it already has https://t.co/lelJBgZEcy

Utterly, utterly depressing and an(other) indictment of #nufc in the Mike Ashley era.

Rafa Benitez was a lifeline for the club: ambitious, urging them to improve and strive. That he has left tells you a lot about what he's left behind.