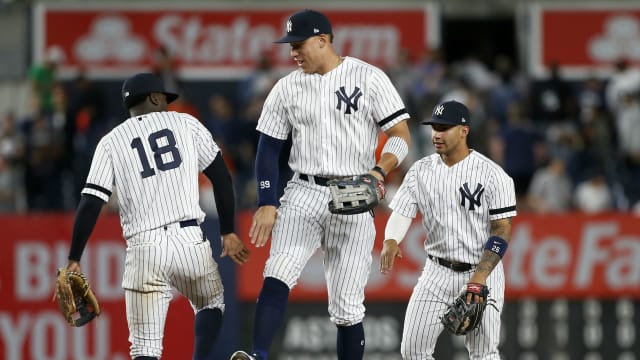 The New York Yankees equalled a franchise record as they trumped the Houston Astros 7-5 in MLB action.

New York recorded their 25th consecutive game with a home run on Saturday to tie a franchise record set in 1941.

The 1941 team also homered in 25 straight games in the month of June that season with Joe DiMaggio leading the way, hitting 10.

This time around it was Gary Sanchez who set the pace with eight home runs during that span. But Saturday, it was Gio Urshela's homer that kept the streak going against the Astros.

Austin Romine added a home run in the seventh inning to tie the score at five runs apiece and Giancarlo Stanton had the go-ahead RBIs to reach the final score.

Josh Reddick and Yordan Alvarez were the only Astros to bring in runs. Both hit homers, Reddick a two-run bomb and Alvarez followed that up with a three-run homer an inning later.

It was a long time coming for Wilkin Castillo. But when the Miami Marlins catcher recorded his first hit in 3,654 days it was a big one. Castillo's go-ahead two-run double helped see off the Philadelphia Phillies 5-3.

Pete Alonso hit his 26th home run of the season to set the National League rookie record for most homers before the All-Star Game. The New York Mets went on to beat the Chicago Cubs 10-2.

A change in the Milwaukee Brewers line-up served the team well. Yasmani Grandal led off for the first time in his career and homered in his opening at-bat. Milwaukee ended a season-high five-game losing streak with his help via a 6-5 win over the Cincinnati Reds.

Tigers struggle at the plate

The Detroit Tigers struggled to get their bats going with only four batters recording hits. Detroit ended up laying a goose egg in a 2-0 loss to the Cleveland Cavaliers.

Seattle Mariners starting pitcher Tommy Milone did not fare well against the Baltimore Orioles. He fell to 1-2 for the season after allowing four hits and three earned runs in the 8-4 loss.

Who is cutting onions? Albert Pujols received a heartfelt reaction from St Louis Cardinals fans when he crushed his 13th home run of the season. The Los Angeles Angels first baseman was also emotional, calling the moment "amazing" despite a 4-2 loss against his former team.

.@PujolsFive makes one more memory for the Cardinals fans. pic.twitter.com/m3VUZzVTng

Tampa Bay are trying to catch up to the American East-leading Yankees and will send Ryan Yarbrough (5-3, 5.26 ERA) to the mound in the final game of this series. The Athletics will counter with Brett Anderson (7-4, 3.68) as they try to move ahead of the Rangers for second place in the AL West.