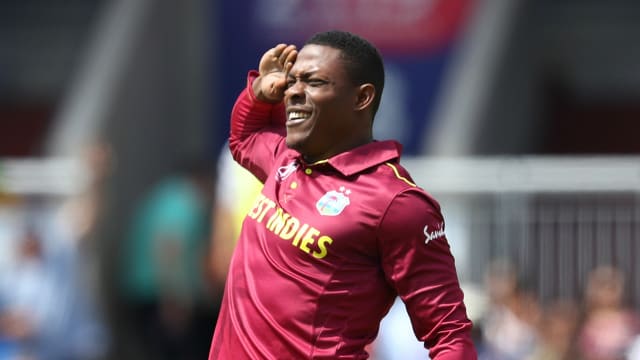 New Zealand finished their innings on 291-8 after a dramatic 50 overs.

Cottrell removed both New Zealand openers, Martin Guptill and Colin Munro, for golden ducks in the first over of the match before Williamson and Ross Taylor put on 160 for the third wicket. Taylor fell to Chris Gayle's gentle off spin for 69 but captain Williamson went on to make 148, only to become another victim of left-armer Cottrell.

Williamson took a big leg-side swipe as he attempted to go to 150 in style, but rather than clear the boundary ropes he sent the ball high behind him, dropping from a great height into the hands of wicketkeeper Shai Hope.

Cottrell offered a trademark salute to the departing Black Caps skipper whose century followed his unbeaten 106 against South Africa last time out.

Cottrell also removed Tom Latham and finished with figures of four for 56, but that was not the sum of his contribution. The 29-year-old also ran out Colin de Grandhomme with a direct strike and right at the death took a pair of catches as Carlos Brathwaite removed Mitchell Santner and James Neesham with the final two balls of the innings.

BANG, BANG two wickets to finish for NZ. It was SIX and out for Santner! Before Neesham was caught at mid-off looking to launch the last ball. Superb recovery with the bat 291/8 #BACKTHEBLACKCAPS#CWC19#WIvNZ
LIVE| https://t.co/aU5ayqheAzpic.twitter.com/53GBVa4jCs